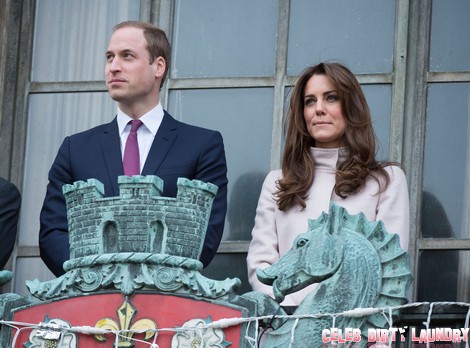 After years of speculation (okay, a year and a half. Which is two decades in royal baby years), it seems that Kate Middleton may finally have a little royal bun in the oven. The not so newlyweds have been spending most of their time in Anglesey, Wales, where Prince William is based with the RAF. Last year it was announced that the two would eventually move into a renovated apartment in Kensington Palace (where renovations cost almost $3 million!), and that move-in date is soon approaching.

A source explained the move: “A baby is the main reason for the move. They have been on such a high since getting married. It’s time for the next step—Kate is hoping she and William can become parents in 2013.”  We haven’t received an official announcement of pregnancy yet, but isn’t it customary to wait until 10 weeks or so to start telling everyone in the world? So assuming fertility isn’t an issue, why haven’t Will and Kate had a baby in private, secluded Anglesey? “They want to bring their child up in a secure environment. [Anglesey’s safety] just isn’t enough.”

Of course, this is a homecoming for Prince William, whose parents Diana, Princess of Wales and Prince Charles were set to live in apartments 8 and 9 at Kensington Palace. Princess Diana eventually moved in after her divorce from Charles, where she lived until her death. His apartment with Kate is on the opposite end of the palace, so we hope that living there won’t be marred with any painful memories. Last winter it was reported that Wills intended to renew his service with the RAF search and rescue unit, which means three more years of service in Wales. Of course, he couldn’t very well leave Kate alone to raise the heir to the throne.

I can’t see Queen Elizabeth allowing her modern grandson to ignore his pregnant bride, even for such important work as a search and rescue pilot. A source makes Kate sound confidant about the move in date, remarking “Kate is keen to put her stamp on the place with things she’s bought on her travels. She felt certain pieces would be nice ‘when we have a bigger home.’” What do you think of the Duke and Duchess’ move to Kensington? Is it merely traditional, or is William holding on to his childhood memories there? Do you think raising a baby in Wales if William stays with RAF is safe or likely?