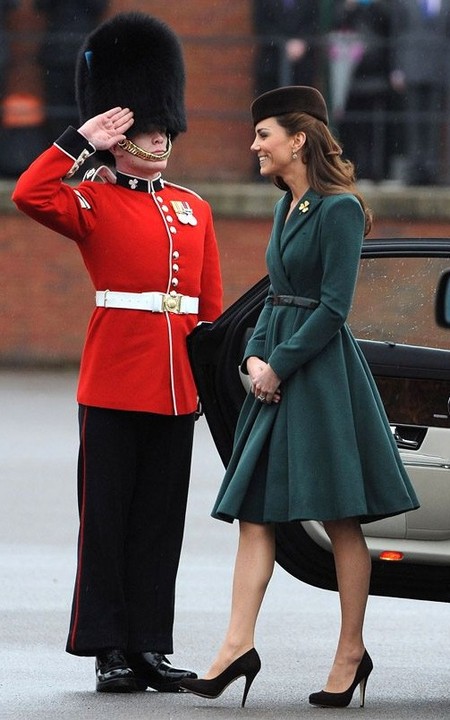 Kate Middleton continues to soldier on alone as Prince William completes his Falkland Island military mission.  Today Duchess Kate looked stunning in green as she handled her first solo military engagement at a special St. Patrick’s Day celebration.  The Duchess of Cambridge is an absolute hit as she displays a genuine happiness and sheer beauty that has not been seen before amongst British royalty.

Kate seems to harbor no ill will and suffers no apparent discomfort over being thrust into the spotlight all by herself with William away.  Even though Kate was reported to be somewhat upset over not being allowed to have sister Pippa serve as her lady-in-waiting, the Duchess seems to have recovered nicely.  Kate is well on her way to surpassing Lady Di’s place as the most popular Royal in modern times.  One thing for certain is that Kate and William’s behavior has already beaten that of Charles and Diana’s by a wide margin.

The Mirror covers details of Kate’s appearance:  Kate Middleton chose a racing green coat dress for her first solo military engagement at the annual parade in Aldershot.  The Duchess of Cambridge brought the luck of the Irish to members of the British Army today at a special St Patrick’s Day celebration.

Kate presented 40 members of the 1st Battalion Irish Guards with sprigs of shamrock at their annual parade in Aldershot, Hampshire.  The Duchess chose a racing green Emilia Wickstead dress coat bought especially for the occasion, with a brown Lock & Co hat, brown suede shoes and a gold shamrock brooch for her first solo military engagement.

Kate was greeted by Commanding Officer Major General William Cubbitt before making her way to the parade ground where 450 soldiers, in full ceremonial uniform of scarlet tunics and bearskins, were waiting for her.

Drummer Oliver Vaughey, 22, who has been a dog handler for two-and-a-half years, said: “He was presented with a shamrock by the Duchess of Cambridge. People saw him shake his collar, probably as a thank you.  “He has been our mascot for four years and always marches in front of the regiment.”

The Duchess smiled as she was presented with a posy by five-year-old Isabella Stevenson, the daughter of the Regimental Sergeant Major.  One soldier said: “Your Royal Highness. On behalf of the 1st Battalion Irish Guards we welcome you and wish you a Happy St Patrick’s Day.

“We also thank you for the shamrocks that you have presented to us.”  Following the visit, Captain Will Jenkins, 25, who celebrated St Patrick’s Day in Afghanistan last year, said it was nice to be at home for the special occasion.

He said: “Last year I was in Afghanistan and the year before that I was in Kenya so this makes a huge difference.

“In Afghanistan I was on operations on HERRICK-13 but we still managed to celebrate St Patrick’s Day. We were presented with a shamrock by the senior officer present and we sung a few songs and had a bit of a church service.

“Today has been fantastic. We are very lucky and honoured to have the Duchess here to carry out a long-standing tradition.  It has always been the history. It’s our heritage to be presented with a shamrock.”

Kate always brightens smiles wherever she goes.  No doubt her appearance made this St Patrick’s Day a very special one for all those in attendance.  Do you think that Kate is the best thing to happen to British royalty in a long time?  Let us know in the comments below.