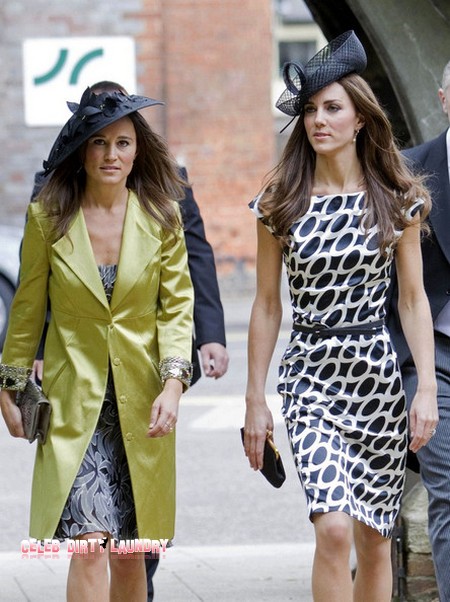 Kate Middleton wanted her sister Pippa Middleton as her lady-in-waiting but Palace authorities refused.  It was felt that Pippa was just too much of a risk with her propensity to attract media attention and perhaps even a conflict of interest because of a publishing agreement for her party-panning book.  So poor Kate has to endure Prince William’s absence without her closest pal, her dear sister, by her side.  Hardly seems fair.

According to sources Kate calls her sister her right hand and feels most relaxed in her company.  Supposedly Kate is annoyed at Pippa’s exclusion and feels that the Palace has put her sister out to pasture.  We suppose it’s a lucky thing that Kate’s cousin, the burlesque stripper, is not hanging around!

Rumors surfaced last week that Kate was regretting her marriage to Prince William.  Let’s hope that this banning of Pippa doesn’t make those rumors come true.

NOW reports:  With pressure on Kate Middleton mounting and  Prince William away in the Falklands,Kate Middleton wanted her sister Pippa at her side as a lady-in-waiting.

However, the Palace wasn’t keen.  A source tells Now: ‘They thought it was better to have an official in the role, especially as Pippa attracts so much media attention and is writing her party planning book.

‘But Kate‘s annoyed – she feels Pippa‘s been “put out to pasture”.  ‘Kate calls her sister her “right hand” and feels relaxed in her company.

‘With other people she feels like she’s being shadowed or baby-sat and that doesn’t gel with her natural independent nature.’

Pippa, 28, and Kate, 30, will now have far less time together than if she’d been a lady-in-waiting.

The source adds: ‘Pippa‘s key to Kate‘s happiness. It’s a stressful, lonely job being a Royal and Pippa would’ve helped to build Kate‘s morale while Wills is away.’

Kate Middleton is the best thing that has happened to British Royalty in the last several decades – at least.  If the Royal Family know what is good for them they will make sure that Kate stays happy.