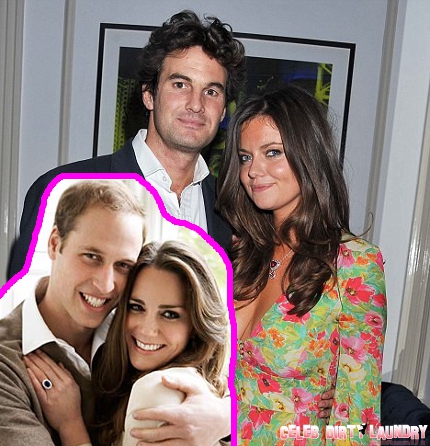 Kate Middleton has found the partner of her dreams in Prince William, but what about Kate’s ex-boyfriend Rupert Finch? Everybody probably forgot about him after the royal hitching ceremony. Well, not to worry, because Rupert, who dated Kate during her time at St. Andrews University, has just got down on one knee for his designer girlfriend Lady Natasha Rufus Isaacs. The couple plans to wed sometime next year, and the verdict on whether or not they’ll invite the Prince and Kate to the wedding is still out on the table. My guess is . . . that they’ll probably accidentally forget to address an invitation to the palace.

Rupert and Natasha are apparently very strong Christians, harboring very traditional views, so it’s said that friends of theirs were not the least bit surprised that they’ve decided to make the trip down the aisle so soon.

Rupert, who is 33, waited until a holiday vacation to Marrakech to propose to his future bride, who’s four years younger than him.

Natasha is, needless to say, overjoyed that she’ll soon be able to don her white veil. Rupert has apparently remained friends with Kate and William, but that doesn’t mean Natasha will be overly eager to have her new man’s ex at the ceremony. However, they both attended the royal wedding so there’s a significant likelihood that they will attend — that is if their busy, demanding royal schedules don’t get in the way.