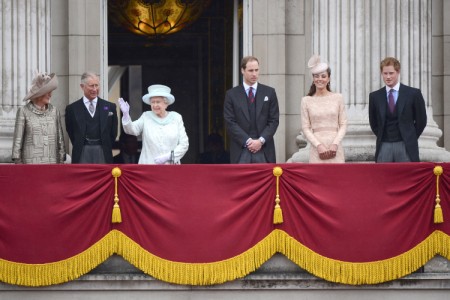 We finally got the royal announcement that Prince William and Kate Middleton have a royal bun in the oven—of course, they didn’t want to tell us! After Kate was hospitalized this morning, the palace cited hyperemesis gravidarum (extreme morning sickness) to pacify worried fans and citizens. They couldn’t very well keep up the “nothing to announce here” act after that! In fact, Kate is taking a dramatic page out of Princess Diana’s book! The late mother of Princes William and Harry was forced to announce her first pregnancy after she fell asleep at a public engagement! To avoid having a diplomatic disaster or a lazy royal, the palace released the news of baby number one. But as the bits of fact surrounding the royal couple are coming together, we have to ask: is it twins?

Let’s look at our good friends, the facts. We know that Kate and Wills were getting desperate to have a baby. As second in line to the throne, William must reproduce (and quickly) to keep his randy brother (or illegitimate step brother?) Prince Harry from inheriting the throne. Two years ago, if Kate birthed only girls, and William died or abdicated, Harry would have been set to inherit after Prince Charles. Parliament changed that, meaning a daughter can inherit from her father. The first duty of a royal wife is to reproduce.

Assuming they’ve been trying unsuccessfully since their marriage (and not before, I’m sure . . . ) to get pregnant, Kate probably has sought out professional help. Last week, GLOBE reported that Kate was undergoing a round of IVF (in vitro fertilization) to help conceive. Because IVF takes several eggs, fertilizes them, then puts them back in the woman’s uterus, it is not unlikely for multiple embryos to attach to the uterine lining, where they grow for 9 months into a baby. This is what happened to Phoebe on Friends when she gave birth to her brother’s triplets.

But what about Kate’s health? We’ve all seen the magazine covers that yell, “Kate is too thin to get pregnant!” or “Can anorexic Kate Middleton conceive?” Well, some mothers of twins report a weight loss during the first trimester, which would go smashingly with Kate’s lean frame. If this is the case, we shouldn’t expect to see a baby bump until week 10 or so. Of course, we have no idea how far along she is right now, so this is a bit of a waiting game.

Finally, it was reported that Kate was hospitalized after hyperemesis gravidarum, which is just extreme or long term morning sickness. The problem this presents is the risk of dehydration, which is dangerous to anyone—but especially to a woman whose water and nutrients are being leached off by a baby. Or by two babies. Yes, hyperemesis gravidarum is often associated with women who are pregnant with multiples! So there you have it. Is Kate pregnant with twins? No matter how many babies she has, I hope the first one out is a girl. Parliament just allowed a daughter to accede the throne, it’s time to break in that new law!