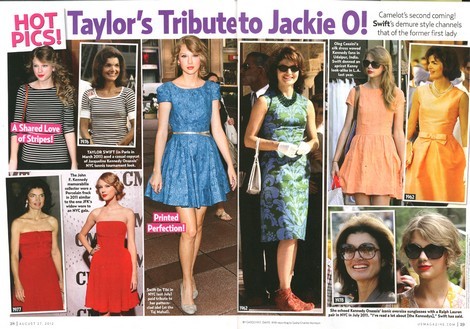 It looks like the story about Taylor Swift being bounced out of a Kennedy wedding is true after all.  The latest confirmation comes from Kathie Lee Gifford, who just so happened to be in attendance as the drama unfolded.  As you probably have already heard, Conor Kennedy decided at the last minute to attend the wedding of Kyle Kennedy, bringing new girlfriend, Taylor, with him. Taylor is obsessed with Jackie Kennedy and what better way to become her alter-ego that to snag a Kennedy? Kathie Lee spoke of the whole incident on the Today show saying:

“The truth is, because I was there, Vicki, Frank’s daughter’s account of what happened in Boston, is accurate,” she said. “Because she said to me as it was happening, ‘I’m really not happy about this.’ … She told me that Conor had emailed her or texted or something like that an hour before. He had not RSVP’d, so she didn’t even know if he was coming or not. She heard that he might be, but he got in touch with her an hour earlier, and said, basically, ‘Can I bring my girlfriend?’

Kathie Lee continued that Victoria “said very nicely, please do not come, but they came anyway. They asked her to leave twice. I thought she did…. I didn’t know there was any drama going on at the time. I’m not sure she didn’t know that she wasn’t invited.  It’s the bride’s day, and that was Vicki’s other concern.” And then, perhaps thinking of Conor, Kathie Lee added, “If you’d done the right thing and RSVP’d, and then had called weeks before and said ‘May I,’ then I think Vicki would have graciously said yes you may.”

It’s obvious that Conor has absolutely no idea about RSVPing and that these big events are mapped out right down to the last detail far in advance.  The standard IS to say no if you forget to respond until the last minute!  Perhaps Taylor didn’t know about Conor’s faux pas here, or if she did she obviously assumed that being Taylor Swift would get her in the door anyway!  It’s kind of nice to know that just because she’s a certified star, the rules weren’t changed for her! It was the bride’s day, period.

Should the couple have been asked to leave, as they apparently were?  Obviously the Kennedys don’t want Taylor Swift around otherwise they would have manged to accommodate her.  Asking a superstar celeb who is dating Conor Kennedy to get the fu*k out of a wedding celebration provides a very clear message – only Taylor doesn’t seem to be picking it up just yet.  What are the Kennedys going to have to do next?  Throw her off a yacht?  Drive her off a bridge?  Tell us your thoughts in the comments below.