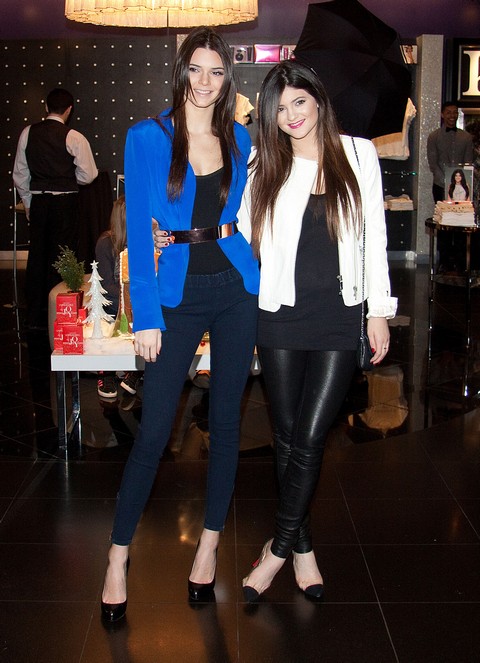 Kendall and Kylie Jenner are probably two of the most entitled teenagers in Hollywood  so we all knew that the Christmas gifts under the tree were going to have to be pretty over-the-top, piggy bank busters. They’ve both started to share a few of the goodies that they scored and the photos prove that Kris Jenner’s daughters’ are most definitely not your average teens. Kendall scored a pair of black studded red back shoes. For those of you not in the know, studded Christian Louboutins retail for about $1400 big ones.  Kylie wasn’t feeling the least bit slighted either because Santa left a Celine Boston tote under the tree for her, after clipping its’ $800 price tag.

I understand that Kendall and Kylie live in a completely different financial realm than you and I, but if you are handing out extravagant gifts to them at this age what is there to work for later?  Most kids were happy, thrilled even to find a tablet or phone under their tree, forget about shoes from Paris!  More importantly, these girls are so accustomed to getting whatever they want that they can’t possibly understand what it’s like to have to really work for something they want.

When will it all blow up in Kris Jenner’s face? I mean, she is much more of a manager than a mother and at some point it’s going to back fire. Will Kendall decide at 20 that she’s sick of helping to preserve the family business and start partying so hard that she puts Lindsay Lohan to shame? Or will Kylie be the kid that decides to distance herself from the family and write a tell-all book?  Kendall and Kylie have sacrificed their adolescence in favor of Hollywood glitz and glamour. Eventually the regret will set in and then what?

Do you think that even privileged girls should be receiving such crazy gifts? Tell us your thoughts in the comments below!