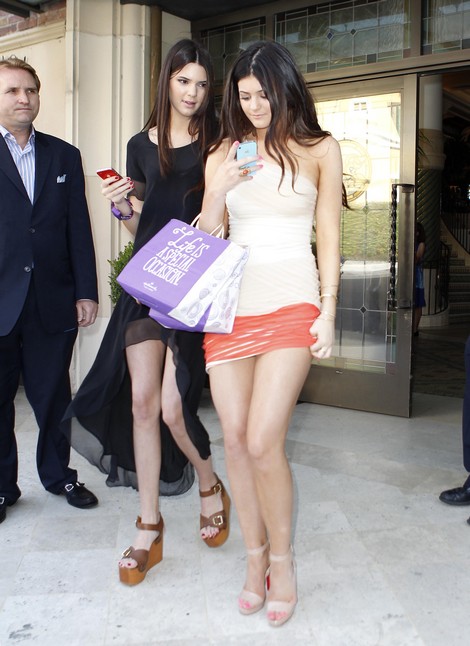 The Kardashians have found that the kruel edge of fame kuts both ways when the publicity hounds were reported to the LA County Sheriff and Department of Children and Family Services for kruelty to the two youngest non-Kardashians, Kendall Jenner and Kylie Jenner.

The cops and social workers were responding to a call from an anonymous tipster that claimed the teens were in danger. A source close to the Kardashians – so any of their millions of twitter followers or any of Kim’s husbands, Kardashian staff plastic surgeons or the legions of fans lined up for the debut of poor Rob Kardashian’s long-awaited sock line – told TMZ that the complaint was “ridiculous because Kylie wasn’t even in the country the day the caller claimed she was in danger. She was in the Philippines.”

I love that excuse. Don’t worry about Kylie – she’s in a foreign country renowned for human trafficking and child prostitution so she can’t be in danger. Really? And if the crimes against children weren’t enough, how about the fact that instead of the 15 year old being in school, her parents have got her walking a fashion runway in a foreign country?

And what about Kendall? Where was she when the alleged abuse occurred? Also at work! The 16 year old – also not in school – was at a photo shoot. I’ll grant you that the girls have a private tutor so they’re not technically skipping school, but who allows their kids to drop out of school to model? Parents with screwed up priorities – are Kris Jenner and Bruce Jenner yearning to be the older and hipper Michael Lohan and Dina Lohan (aka Drunk and Drunker)?

I have to concur with whoever wisely reported Kris Jenner (and the oblivious Bruce Jenner) for abuse. These girls are in quite a bit of danger… Let’s make a list.

#1 In danger of… not learning even the most basic skills and socialization you get from attending real school.

#2 In danger of… not having a firm grip on reality because they think everyday life for a teenager is about Louis Vuitton, modeling shoots and checking out tweets by your big sister’s rapper boyfriend saying how hard he just f*&%$d their sister.

#3 In danger of… thinking a sex tape is a more viable way to launch a career than a college degree (or even a high school diploma).

#4 In danger of… missing out on what little remains (or could still be salvaged) of their childhoods. But on the flipside, at least momager Kris won’t miss out on her 10% cut for pimping out her underage daughters.

#5 In danger of… having no concept of normalcy which could result in later suffering a Britney Spears style breakdown and head shaving, Demi Lovato style cutting, Lindsay Lohan style shoplifting or – worse yet – River Phoenix style eightballing himself to death. Fame at a young age has worked out so well for so many, why not throw these girls to the wolves now?

A law enforcement source told Radar Online that “Social workers met with the girls individually and determined that they were fine but out of an abundance of caution, cops and social workers will be making another visit to the house Monday afternoon before they officially close the case. Under California law, anytime a call is made to DCFS alleging that a minor is in danger, whether of physical or emotional abuse, it must be investigated.”

That’s great, but I think they decided too soon that nothing wrong is going on at Kasa Kardashian. These girls are in trouble already – the only question is how long it will take the symptoms to manifest. Already new driver Kendall has been reported swerving across lanes in her $90,000 Range Rover because she texts while driving.

Hmm… Anybody hear of any other young stars with driving problems? Hey Kendall, perhaps you can carpool with Amanda Bynes and Lindsay?

The Kardashians are accusing a tabloid reporter of calling in the abuse claims – which they maintain are bogus. But really, it could have been anyone with basic cable that watches what goes on in that house…

A source close to the Kardashians told Radar, “Bruce and Kris cooperated fully with social workers and the police. They have nothing to hide.”

Of course they have nothing to hide – if it’s not on Keeping Up With the Kardashians, it’s on whoever and whoever take wherever or tweeted by any of many, many members of the famewhore family’s members. It would be a refreshing change if that family would hide something…