Kim Kardashian And Jon Hamm To Star In A Sex Tape Together? 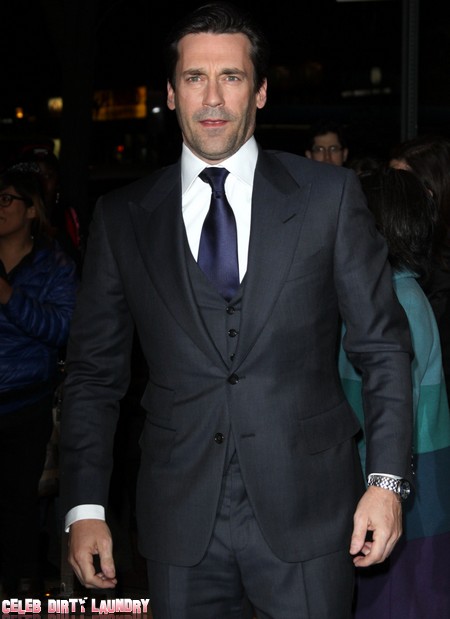 Jon told Time Out London:   “The sexy thing is so ephemeral and meaningless other than in the world of selling magazines. Who cares, when it’s reduced to just that? You might as well be a Kardashian and have a sex tape.”

“It’s not for me to define. It’s exclusively in the purview of others and I can’t remotely be a part of it. I guess it’s better than the alternative. I mean, what’s the opposite of a sex symbol? A person who makes children cry when they see their picture?”

Jon and Kim have been involved in a war of words ever since he blasted the ‘Keeping Up With The Kardashians’ star for being famous for being stupid.

Jon said about Kim:  “stupidity is certainly celebrated. Being a f***ing idiot is a valuable commodity in this culture because you’re rewarded significantly.”

Kim then fired back on twitter, saying:  “Calling someone who runs their own businesses, is a part of a successful TV show, produces, writes, designs, and creates, ‘stupid,’ is in my opinion careless.”

Jon later reiterated his comments, saying:   “I don’t think they were careless. I think they were accurate.  It’s a part of our culture that I certainly don’t identify with, and I don’t really understand the appeal of it other than in a sort of car crash sensibility. And it’s not something that I partake in or enjoy, but it is what is and here we are.”

“There are a lot of channels on the dials and those channels need to be filled up with things… It’s different strokes for different folks.”

Speaking of different strokes for different folks can you see the Kimster and Jon doing the nasty on camera?  Perhaps in a parallel universe…

What do you think?  Is Kim K stupid?  I don’t think so – she has a huge market to which she both appeals and panders.  Who is Jon Hamm anyway?  What makes his brand of acting and entertainment so superior?  Sound off in the comments below.  Let us know what you think.