Kris Humphries Beaten Up By Kelly Osbourne For Kim Kardashian 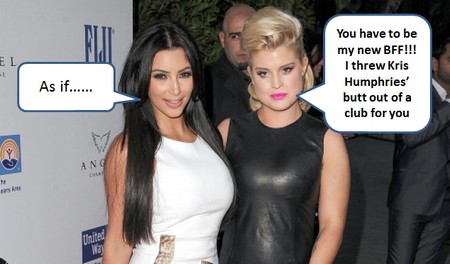 Kelly Osbourne took it upon herself to have Kris Humphries thrown out of Kim Kardashian’s favorite nightclub. Kris was happily partying at Beacher’s Madhouse on the Sunset Boulevard Wednesday night when he approached by security and told to get his butt gone. The bewildered Kris was “so embarrassed and pissed,” says an insider, adding, “he was mortified.”

Kelly is apparently the creative director of the club and consequently has some clout there. The insider tells NYP: “Kim is a regular at the club, and Kelly wanted to stay loyal to her.” The source added, “It was towards the end of the night — Kelly was furious he was in there. You could see the disgust in her face. She sent security over, and they kicked him out. He was mortified.”  I guess Kelly figures that Kris has no business hanging out where he might encounter Kim.  Kelly is such a suck up – Kim Kardashian needs Kelly’s support like she needs a bigger behind.

Kris Humphries life gets stranger every day.  First of all he is an NBA player which is obviously quite a trip in itself.  Then he gets set up by the Kardashian-Jenner cabal and agrees to marry Kim.  This was a mystery move since Kris had to know that Kim had slept with every rapper who would have her – and was probably doing Kanye West while she and Kris were engaged.  But Kris married the skanky famewhore anyway – and after the K-J clan was done with him he was discarded – Kim filed for divorce.

Shortly after being tossed aside like rubbish, Kris hooks up with Myla Sinanaj who is a sleazy hooker, according to Kris.  Myla, who reminds me of Octomom without the kids, actually manages to make Kim look good.  Between her threats, lawsuits, collaboration with Kim and her lawyers, and false pregnancy, Kris finds himself embroiled in another relationship in which he is used, abused, and unable to properly navigate.  Let’s face it, Kris Humphries is a jerk.

But while we are discussing jerks, let’s move on to Kelly.  Kelly Osbourne is pathetic – and revolting.  She manages to combine the luck of birth with absolutely zero looks or talent.  Wait a minute – that sounds just like her mom, Sharon Osbourne, doesn’t it? Kelly is a groupie – she insinuates herself into the lives of real stars, like Miley Cyrus, and often fancies herself as their champion.  When I read about Kelly I’m always thinking ‘why doesn’t she mind her own business, sober up, and get a life.’