Kris Jenner Divorce Certain as Bruce Discovers Her Toyboy and Walks Out! (Photo) 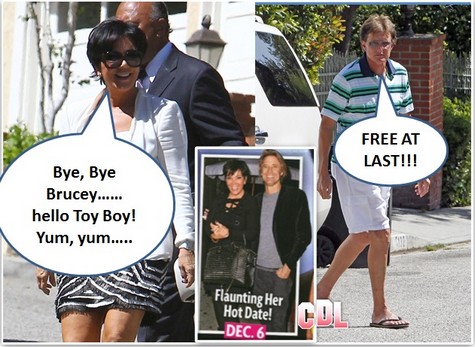 More and more reports are coming in that a Jenner divorce is imminent.  Bruce Jenner and wife Kris Jenner are said to be beyond repair in their marriage and have decided to finally call it quits.  Star is reporting that the straw that broke the camel’s back was the couple’s youngest daughters complaints.

Kylie and Kendall Jenner have reportedly been upset with Kris and her money hungry momager ways and have decided to ask dad, Bruce, for help.  “Kylie and Kendall broke down crying to Bruce, admitting that they feel like they don’t have a mother and they believe her only concern is figuring out new ways to make money off of them,” said an insider.  “There’s no way he’s going to sit back and watch her pimp them out anymore like she’s done her other daughters,” adds the source.

Daddy Jenner isn’t the only savior that was enlisted by the girls.  Apparently, Kourtney, Khloe, and Rob are also looking out for their baby sisters’ best interest.  ” The younger sisters told the older ones that they feel like Kris only sees them as dollar signs, which broke their hearts.”  I guess Kim doesn’t agree as there was no mention of her being on Bruce’s side.  Then again, that’s to be expected from someone who continues to get residuals from her “sex-tape” sales.  I guess momager Kris was trying to get the girls in on the family business as early as possible.

If that angle doesn’t work in Bruce’s quest for a divorce and a life away from the spotlight then Kris’ latest extra-marital affair might help speed things along.  Jezebel has reported that Kris Jenner was seen out for an intimate dinner with Australian photographer, Russell James.  The twosome were said to be flirting like high schoolers in full view of other diners.

Things are going to get ugly from here on out.  Bruce values his children more than their ability to bring in income which is more than could be said for selfish mom Kris.  I can’t wait to see how this is going to play out and how much longer they deny the inevitable.  In the words of Michael Buffer, “Let’s get ready to rumble!”  It is going to be a knock down, drag out fight with these two.