Kristen Stewart And Robert Pattinson: First Interview Since Scandal, Did They Try Too Hard? 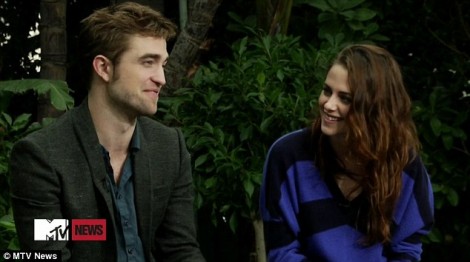 MTV scored the first interview with Kristen Stewart And Robert Pattinson post the momentary indiscretion and I was able to watch a good three minute snippet of it this morning. SMILES! GIGGLES! FUN! FUN! FUN! Rob, Kristen (and Taylor Lautner) were having such a blast they could barely take time away from all their inside jokes to answer the questions properly. We LOVE each other. Can’t you tell? But was this too happy, happy, joy, joy or did it really seem that Kristen and Rob are comfortable around the cameras and each other again?

In all fairness, I’m just poking fun with them now. Rob and Kristen sold it pretty damn well and acted like they normally have during these things. Rob cracked joke after inappropriate joke while Kristen fidgeted and interjected a little while Taylor tried to be the most professional guy in the room. The trio has been doing this since the very beginning and it seems to work for them. It creates the intended illusion of tight family and I’m a super nerd so I enjoyed every second.

But if you’re looking to do anything more than just critique body language and scrutinize how many times Kristen and Rob actually looked at each other then think again. MTV First: The Twilight Saga – Break Dawn Part 2 was all about the movie and, as you’ve probably guessed, Kristen and Rob did not take time to address the cheating scandal or if they were only back together to sell movie tickets one last time. Of course they talked the sex scenes since they’re a pretty big deal in this movie and Rob said they were just as good as the pottery scene in Ghost. That’s funny. That kid doesn’t get enough credit for being witty and smart. Kristen always like to sound so esoteric and thoughtful in interviews but Rob’s little one liners are good sometimes. But he actually got serious and said something pretty interesting that I’m sure many people will read way into. On asked about the difference between being a part of the first movie and the last he said, “It felt quite free and dangerous. This one – the bigger something gets – it gets pretty heavy. You’re part of a machine at that point. You know your face is still going to be on the front of it. But you have a little bit less control  – a lot less control. So it was kind of scary.”

Is he talking about the machine of actually making the movie? The fans’ expectations were too great to get creative and think outside of the Twilight box? I totally agree. Down to Edward’s hair and mannerisms, those fans knew what they wanted and expected the movies to deliver (which makes the fact that they actually changed the ending curious as all hell). Or is Robert talking about the other part of the machine – the promotion machine? Is he dropping hints about the hoops he and Kristen have had to jump through to convince the world they’re back together? I have no idea. I’ve never known Rob to speak in code but ever since the Rupert-gate I’ve stopped taking these crazy kids at face value because I’m super paranoid they’re out to jerk me around!

Anyway, what do you think of the first interview since affair? Robert Pattinson and Kristen Stewart are pros at this by now. I didn’t see anything out of the ordinary and they actually sold me on the happy. How about you?