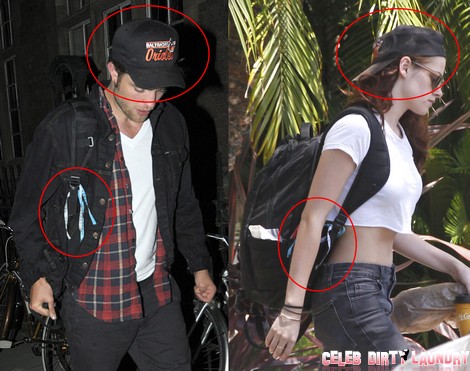 As previously reported by Celeb Dirty Laundry, Kristen Stewart’s first appearance last week since her deviously backstabbing scandal with Rupert Sanders had her not only wearing a tiny cropped white T-shirt looking beyond thin – but also she was sportin’ Robert Pattinson favorite Orioles baseball cap and his black backpack.

Her choice of clothing had us all wondering, is she sending a message out to RPattz by wearing his gear?  Let’s take a look at the photos for a second – now if I were her and I was trying to send out a message to the man I love then later scorned, I’d say wearing his fav’s would be the best way to go.

Kristen was also spotted wearing the gold ring he had previously given her, opening up about it in June amid reports that it was indeed given to her by Rob.

“Everyone wants to know,” she said of the rumors it was a gift from Pattinson. “Everyone knows already — it’s ridiculous.”

Looks like KStew is having quite the tough go – I’ll bet one trillion dolla dolla bills that she would do anything to take back her indiscretions.  If only for the wild embarrassment it has caused her.  My question is – what if Rob wants his bling back?  And his favorite hat? I’d be pretty bummed if somewhat had my favorite hat… just saying.

As for the state of the couple’s relationship, no one knows as neither side are talking.  Rob, for his part, is coming out as the guy on top. He’s been promoting his latest film Cosmopolis and holding his head high.  The Sun is also claiming that Rob has agreed to walk the red carpet for Breaking Dawn Part 2 – with Kristen.  Say what?!?  A source told The Sun:

“He’s told movie bosses he’ll walk the red carpet to save her from embarrassment and any female fans booing her. He is being professional and taking the higher moral ground.”

Can he be any more amazing? Kristen I got say – you messed up bad girl, really, really bad…

Is Kristen Stewart playing mind games with Robert Pattinson – and does she look like she eating anymore? When Kristen finally emerged from hiding earlier this week, she was spotted wearing Robert’s backpack and Baltimore Orioles baseball cap. Was Kristen trying to send Rob a message that she misses him or has she just lost her mind – is she pretending she is still his girlfriend?