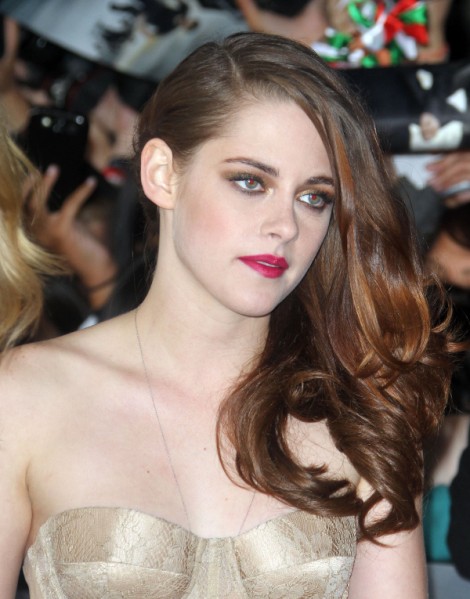 At this point I just feel bad for Kristen Stewart. This was awkward as all hell. During the world premiere of Breaking Dawn – Part 2, Kristen was game and sat down with Ariana Grande to answer questions she picked out of fish bowl. Bad, bad idea. What do you think all the questions had to do with?

The first read: “Taylor Swift writes a lot of break-up songs. Is the guy always to blame for heartbreak?” and Kristen quickly scrunched the paper up and replied, “Nah, come on now”. Good sport Kristen. Good sport. Now MOVE ON. But she doesn’t. Ariana gets her to pick out another question and, damn, if it isn’t any better than the first.

Kristen starts to read, “Which break up -” but cuts herself off quickly and asks Ariana, “What? What are you doing?” But she composed herself and read the rest of the question and joked her way through it. Good for her! But watch the video. Kristen’s cutting her so bad with her eyes. It’s hilarious. What a clever but shitty way for a presenter to ask nasty questions without looking like a total d-ck. Obviously the odds aren’t good that Kristen pulled the ONLY two questions out of that bowl that had anything to do with cheating or breaking up. I’m sure every piece of paper in there had some loose connection to Rupert Sanders and Robert Pattinson.

I usually like watching Kristen squirm. It’s refreshing to see a Hollywood A-lister who can’t control their shit but this was just crappy. She got blindsided here and kept it together. But I have a feeling she won’t be going back to Ariana Grande or picking up anonymous questions anytime soon.

Do you think it was all just a coincidence or was the segment just a craft way for the interviewer to ask if Robert Pattinson was to blame for the cheating scandal? How did she fare under pressure of the interview and the Breaking Dawn – Part 2 premiere? Kristen Stewart did better than expected, yes?