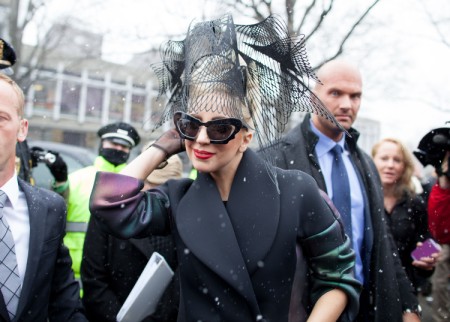 Lady Gaga’s no stranger to controversy or writing bad lyrics, but her new song about the beloved Princess Diana is leaving many royal lovers disgusted and appalled.

She debuted her newest song “Princess Die” in Melbourne, Australia and Bang! magazine reports she didn’t get quite the accepting adulation she’s used to over the track that references Princess Diana’s famed car crash and subsequent death in 1997. She sang, “And wish that I would go / In my rich boyfriend’s limo / Right after he proposed / With a 16-carat stone wrapped in rose gold / With the papparazzi all swarming around /So bob head your head for another dead blonde.”

God, that’s stupid. I’m not sure what I hate more, the writing or the subject matter. In the same song she also sang, “I wish that I could cope but I took pills and left a note” which is inflaming organizations who think she’s glorifying suicide. Chris Wagner, communications director for Lifeline, came out against her and said, “We understand artistic license and we get artistic expression, but celebrities need to recognise that they’re role models for young people in the community.”

I don’t know why I’m surprised since this is what Lady Gaga does. She starts controversy when her music can’t hold its own and right now it definitely can’t. I couldn’t stand her second album and I’m not a fan of using sensational news to capture attention for yourself. But I’m more interested in what Elton John thinks. Suddenly the three-way feud between Madonna, Elton and Lady Gaga just got more interesting. Not only did Elton rework Candle in the Wind for Diana, but he was one of her best friends. I still get sad when I hear that song. Don’t pretend like you didn’t buy the cassette because we ALL did!

Elton’s tight with Gaga. She’s his kid’s godmother, but Elton’s not one to bite his tongue when something pisses him off – just as Madonna. And Madonna and Lady Gaga have been bitching at each other lately. Where will Gaga turn if Elton goes at her? Will Madonna call a truce and shelter her from his amazing hissy fits or will Madonna sneak in the back window and try to broker a truce with Elton against Gaga? It’s like Risk the musical!

What do you think of the lyrics? Is referring to Diana as “another dead blonde” appropriate or should Gaga not hold her breath on getting invited back to Buckingham Palace anytime soon?