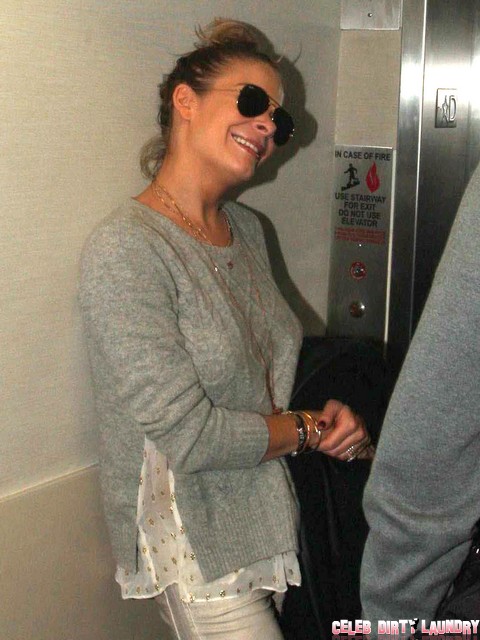 Somewhere along the way, LeAnn Rimes turned into one of those celebrities that just never seems to be able to pull herself together. I know that her first marriage to Dean Shermet amounted to little more than a good friendship but at least back then she seemed stable and able to cope. She claims that Eddie Cibrian is her soul mate and the love of her life but man, it really seems like the minute they got together something just broke inside of her and she has been dangling from the back of the crazy train ever since. Not totally on board, but not safe with both feet on the ground either.

She supposedly was proactive when she checked herself into a treatment facility last August. Her PR people wanted up to believe that she really didn’t NEED to be there just yet, but instead she WANTED help before she fell off the mental cliff. Her appearances since being discharged haven’t exactly worked in her favor. There was that sit down interview with Guiliana Rancic that to me made LeAnn look a bit medicated and just off at times. Then last week was her duet on The X Factor finale with favorite, Carly Rose Sonenclar, 3 minutes onstage and it was clear that LeAnn was a mess.  Immediately the media lit up over her being drunk onstage. I’m not sure that she was liquored up but I do know that she forgot the lyrics to her own song in between her voice cracking and left Carly Rose, who is only 13, to save the whole song.

According to Life & Style Magazine, those close to LeAnn fear that she’s about ready to fall apart all over again and from the looks of things, they could be right.  It certainly seems like whatever deep rooted issues originally caused her first breakdown are still weighing her down. Maybe it’s time she take a good close look at her relationship with her husband. We never questioned LeAnn’s mental health, eating issues or alcohol problems until she hooked up with Eddie.  Is she extremely fragile all over again? Tell us your thoughts in the comments below!

Singer LeAnn Rimes, her husband actor Eddie Cibrian and his sons Jake and Mason departing on a flight at LAX airport in Los Angeles, California on December 26, 2012.