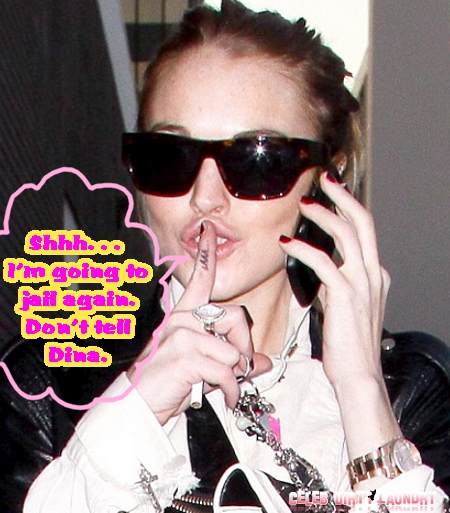 We’ve just learned that Lindsay Lohan, in dealing with this whole car crash disaster, actually fed the cops a big, fat, juicy lie! Lindsay, during questioning after she crashed her Porsche into the back of a giant freakin’ semi truck, told cops that she wasn’t the driver behind the wheel when, in all actuality, she was.

TMZ reports that when Lindsay was in the hospital getting checked out for any injuries she might have suffered after the crash, Santa Monica Police Officers questioned LiLo . . . because that’s what cops do. Lindsay told them that her assistant was the one driving and, not long after, her assistant (whether knowingly or unknowingly, we’re not sure) confirmed the fact that LiLo was in fact behind the wheel.

In an exclusive report, TMZ says that officials are currently “writing up a report that will include Lindsay’s lie.  It’s a crime to provide false info to a police officer.  In addition, lying to police could trigger a probation violation in her shoplifting case, which means she faces the possibility of jail on 2 fronts.”

Witnesses to the accident report that LiLo was seen exiting the passenger side of the car, which means that if LiLo was in fact driving (seems she was) that she would have had to climb over the car’s middle console — she would’ve also had to have devised this plan only moments after she hit the back of the truck! Wow, not only is she a lying druggy, she’s also a schemer!

*SIGH* Lindsay . . . . why do you have to stress me out like this! I wanted to believe you and your words very bad after this crash — you know I always want to support you — but it’s moments like these when I feel like I need to hang up my ginger hair forever. You might want to get a fake passport and leave the country now, girl. Because if you stumble into the courtroom of Judge Stephanie Sautner again . . . she’s going to go psycho-crazy-law-woman on you and throw you in prison for eternity!