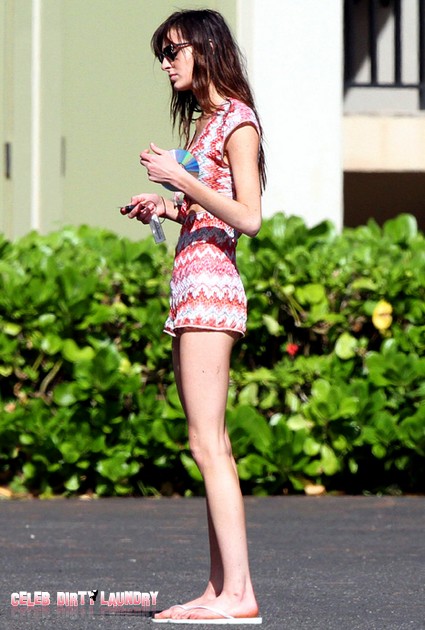 Lindsay Lohan’s little sister Ali Lohan looks might anorexic in a frightening series of new modeling shots.  Momanager Dina Lohan is an absolute nightmare – remember when she took Lindsay out drinking after she got out of rehab a couple of years ago?  Well now Lindsay is at least making an attempt to have a life but Ali looks like she is in trouble.

Ali looks disturbingly thin in her new photos – she is past the point of thin and looks as if she does not eat.  Is this what a modelling career for Ali means – starving herself to the point where her beauty takes second place to her anorexic appearance.

Ali has denied in the past that she has an eating disorder – what a surprise… saying she’s ‘always had a fast metabolism and is able to eat what she wants, from scrambled eggs with American cheese and hot sauce to Nutella. I can just eat [it] out of the jar with a glass of milk.’  The old fast metabolism story…

Ali was looking sickly anorexic 4 months ago – have a LOOK HERE – and clearly the problem has not abated.

Ali looks positively emaciated in these brand-new modeling pics! This can’t be healthy.

When will someone step in and help Ali Lohan? We know she’s been pursuing modeling for several years now, but these new pictures have us convinced it might not be the best road for her to go down. Just look at how disturbingly thin she is these new modeling shots!

Now that Ali’s older sister Lindsay Lohan seems to have her life back together, maybe momanager Dina Lohan can finally focus on Ali. She’s disappearing right before our eyes!

We’ve seen so many other stars become scary skinny recently — Angelina Jolie being one of the major offenders — and we hate having to add one more to the list.

Dina – get you daughter out of modeling NOW!  At least momanager Kris Jenner keep her older daughters, especially Kim and Khloe, pleasingly plump.  Check out their buffalo butts on display last week during their road-rage skirmish.

Do you think Ali looks anorexic?  Is this a healthy appearance?  Let us know what you think in the comments below.