BY Danity Donnaly on May 30, 2012 | Comments: Leave Comments
Related : Celebrities 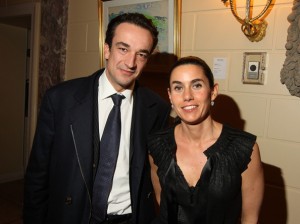 Mary Kate Olsen’s boyfriend is said to be Olivier Sarkozy, former French president Nicolas Sarkozy’s younger half brother and from what we hear things are getting serious awfully quick.

The Daily Mail is reporting that the 25-year-old child star has been dating the 42-year-old asset manager for ONE month! And apparently they are “head over heels”.

The NY Post originally posted the news saying that the duo spent Memorial Day weekend together in the Hamptons.

So what do we know about Mr. Olivier? Apparently the guy is an assets manager for a firm called the Carlyle Group. He is said to be the managing director for the Washington, D.C. based company. And from what he hear, he is quite the businessman as he was responsible for several important equity raising transactions. Mr. Sarkozy received his masters in medieval history from St. Andrews University in Scotland and he currently serves as a member of the Board of Directors of BankUnited.

Sarkozy married Charlotte back in the 1990’s whom he recently separated from. The couple have two children together. I’m wondering what she is thinking about this whole big hookup. That is Olivier and his wife Charlotte in the photo above.

Mary Kate has been linked to several men including Seth Campbell, the late Heath Ledger, Stavros Niarchos and Max Snow.

Miss Olsen has an interesting taste in men. None of them are really good looking but there is one constant. They all have a big freakin’ load of cash! Get it, girl. Not that she needs any extra bank roll anyways.