BY Kinsley Goldman on May 7, 2012 | Comments: Leave Comments
Related : Dancing With the stars, Dancing With The Stars Season 14, Melissa Gilbert, Reality TV, Recap 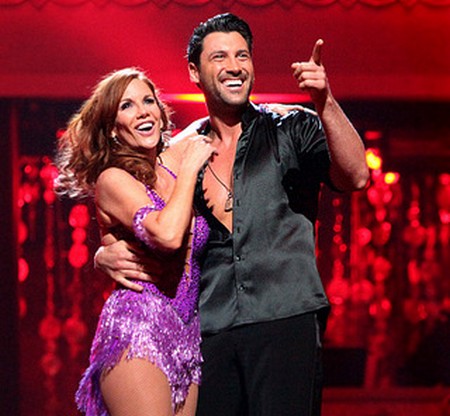 Melissa Gilbert danced the Foxtrot tonight for her first dance as Dancing With The Stars continued with its eighth episode.  The competition is really heating up as the remaining six couples hit the ballroom tonight with two rounds of competitive dance performances, a ballroom dance and the Trio dance — both of which will be a style that they’ve not yet performed.  We recapped the tonight’s show for you and if you want to see how all the couples did go HERE!  Did you see Melissa’s performance last week if you missed it you can see it here!

Melissa Gilbert and professional dancer Maksim Chmerkovskiy dancing the Foxtrot.   Maks had this to say about their performance tonight, “Everybody had to choose a third person to dance with the Latin round next week. ‘Cause we’re doing two – we’re doing ballroom and the Latin. Our Latin is Samba and she picked Val. I had nothing to do with this choice.”

Judges Comments: Carrie Ann: your shoulders were down. That was your best dance ever. This was a fantastic dance, unfortunately got nervous and there were few mess ups.  Len:  Potentially this was your best and so far, unfortunately there were one of two incidents. Good dancing.  Bruno:  The cougar got her prize, and a much better ride. You started to finish your lines. The presentation was the best we’ve had. Good job!

Watch the video below and let us know what you think? Do you think that Melissa did enough to keep him around for another week? Sound out in the comments below!