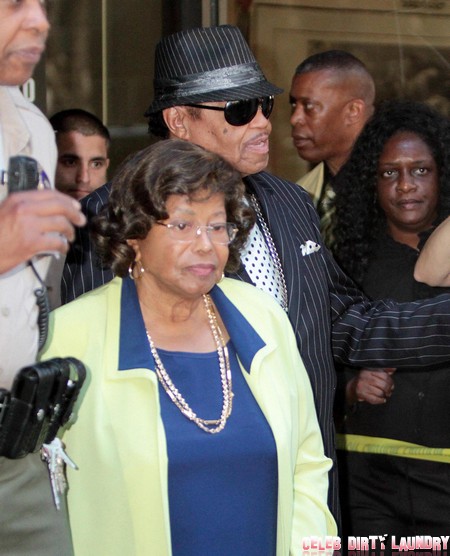 It has been clear for ages that when you enter then world of Michael Jackson, you enter an alternate reality. Jackson’s final years were plagued by financial and legal problems, and a heavy dose of public scrutiny – remember the balcony baby-dangling fiasco? I do not wish to speak ill of the dead, so we can just all agree that Michael was a special snowflake.

Ever hear the old saying, “The apple doesn’t fall far from the tree”? In the December 3rd print edition, GLOBE sheds some light on just how strange, and downright SAD, the relationship with his family really was. Reports of a secret room in Michael’s house surfaced in 2003, amidst sexual abuse charges, when police discovered the room in a raid. According to GLOBE, this room was used to hide from his own FAMILY!

Several details of the deceased King of Pop’s life are being unveiled in a new biography by Randall Sullivan titled “The Strange Life and Tragic Death of Michael Jackson”. GLOBE reports:

A sobbing, scared to death Michael Jackson and his children cowered in the secret safe room as rampaging intruders-his own greedy relatives-tore apart his Neverland ranch looking for loot! That’s the shocking picture painted by a blockbuster new biography about the King of Pop, ‘the strange life and tragic death of Michael Jackson’ by Randall Sullivan.

Apparently, Michael had agreed to give each family member who participated in the 30th Anniversary Jackson 5 concerts – two concerts held at New York’s Madison Square Garden in 2001- a hefty sum of $250,000. Easy money, seeing as how Michael was willing to shell out the cash even if the family member just sat in the audience and flashed a smile onscreen. All was well and good until big brother Jermaine Jackson learned that Michael was pulling in a cool $10 million for the show. So Jermaine, with parents Katherine and Joe Jackson in tow, went to Michael’s mansion to throw a massive bitch-fit. After gaining entry by claiming they had to use the bathroom, GLOBE reports:

The family “literally ransacked the place,” a source told the author.

Meanwhile, Michael retreated with son Prince, then 4, and 3-year-old daughter Paris to “a hiding place concealed behind the secret door at the back of his bedroom closet.”

From there, he called a producer friend. “He was in tears, whimpering into the phone,” the book says. According to the biography, Michael told the producer, “you see what they do to me?”

Sadface. I can only imagine what other horrors are yet to be discovered. Luckily, many close to Michael’s three children Prince, Paris and Blanket insist that the kiddos are adjusting to life without their father, and are doing quite well. But with Katherine and Joe’s involvement in their life, let’s just hope the madness doesn’t spread to the youngest Jacksons.