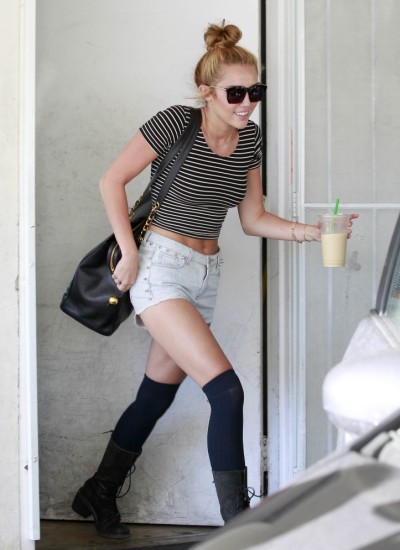 Health crazed pothead Miley Cyrus made a stop outside a marijuana dispensary over the weekend to score some weed with a friend.

Photo agency X17Online says Miley didn’t leave her white convertible, but waited while her friend made a run inside.

Medical marijuana is legal in California so there’s nothing incriminating going on here unless we find pictures later of Miley partaking in the goods. Miley’s no stranger to passing the dutchie. In 2010 she was videotaped smoking something out of a bong. She later said it was the herb, salvia. And in 2011 she told a crowd at her birthday party, “You know you’re a stoner when your friends make you a Bob Marley cake. You know you smoke way too much f-cking weed.”

Would you care if Miley was a big pothead? She’s doing her damnedest to show up all she’s grown out of her goody goody Disney image with her daisy duke shorts and cleavage baring crop tops. Is this just another example of how the newly engaged star can’t be tamed? She drove in a convertible for crying out loud! It’s not like she was trying to hide it. Sure, it’s no big deal for a regular person to go pick up a prescription, but Miley knows she gets followed and papped constantly in Hollywood. This just proves that she loves the attention her body and her antics are getting her since she can’t star in any good movies.

Weed is a notorious diet killer. If she’s smoking the ganja and maintaining those rock hard abs then she’s got more willpower then I’ve ever dreamed. Of course it can also make you do stupid things like let your assistant stare at your rack and touch your legs while you’re swimming and vacationing away from your fiance. Just saying….