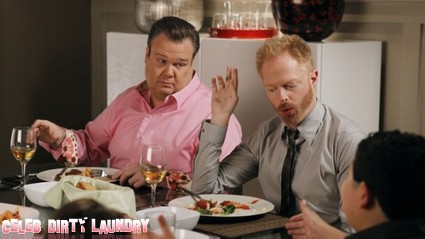 Did you watch Modern Family tonight? We did and we recapped it for you! I absolutely love this show, the chemistry between the actors is what keeps me coming back, what about you?

Tonight Claire was thinking Phil’s partner, Ted, was a little too “touchy feely” with her, what did you think? I agreed with Claire, it’s not appropriate to kiss everyone on the lips and didn’t it creep you out when he did it with his mother? I loved how Phil was jealous when Ted made Claire laugh, but don’t you think he should have been upset with he kissed her multiple times?

I was a little disappointed that Mitchell didn’t confront Cameron about his suggesting that Jay go over and interrupt his interview with Booker Bell, what did you think about that? It really wasn’t Jay’s fault and Mitchell not only got mad at him but Booker Bell called him a stalker.

I thought Gloria having a girls day out with Lilly was adorable, didn’t you? And I loved the leopard print jackets and matching apron for Cameron – didn’t you think it suited him perfectly?

Gloria was really upset that Cameron rearranged her kitchen, do you think he should have done it, or left it the way it was? I think he rearranged to be nice to her and it was so nice how they compromised at the end and both were there making dinner together.

Haley and Alex fighting was priceless, I don’t know two siblings that don’t act the same. Poor Luke, he tried to get them to stop and instead got ambushed and dressed up like a girl, “Betty Luke”. Did you think the girls should have done that? I think it was all in good fun and he didn’t seem to mind.