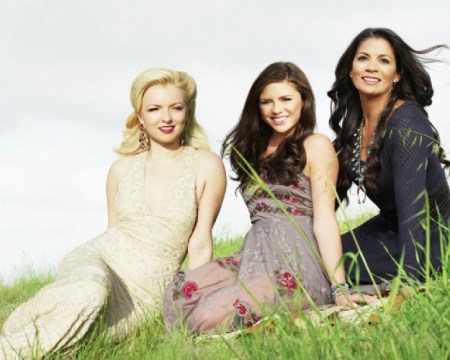 Tonight is an all new episode of “Mrs. Eastwood & Company” and as we told you last week, there’s not much to see of legendary actor Clint Eastwood. Did you see the premiere episode last week? If you missed it, you can read the full recap HERE. The show channels the lives of Mrs. Eastwood (Dina) and her daughters, 19-year old Francesca and 15-year old Morgan.

Last week, Morgan wanted to get a belly button ring and Dina decided that the best way to discourage her was to get one for herself. I don’t know how far that gets her on the being a good parent scale, but it worked. Morgan was so disgusted that she gave up the idea altogether. Meanwhile, we also got to here again and again, how fantastic Francesca’s boyfriend Tyler is. Dina’s boy band from South America, Overtone had a two story lines, one about Eddie coming out of the closet and another about Francesca having a crush on one of the guys.

Tonight the episode is called “London Bridge” and we will get to see more of Francesca’s boyfriend when he puts her into a dangerous situation and I’m really wondering what that could possible be. Meanwhile, Dina is away at a wedding and panics when Morgan throws a party.

So far the reviews that have come in for “Mrs. Eastwood & Company” have not been that strong, here’s what the Boston Herald had to say, “Nobody here is as self-obsessed as the least Kardashian, which will come as a relief to the celebrity-jaded, but we all know where the real talent lies in this family, and he’s not onscreen enough to justify this series”. What do you think? Will not having Clint in the show much actually hurt it?

The ratings for the premiere episode was #23 for last Sunday night with 1,095 million viewers, lets hope they can pull in better this week.

We will be live blogging the episode with all the up-to-the-minute details so make sure to come back to this spot and watch the show with us at 10:00pm.   Make sure to refresh often so you get the most current info!  While you wait for the episode you can catch a sneak peek of tonight’s episode and some SPOILERS HERE.

RECAP: The second episode in this series seems to focus heavily on 19 year old daughter Francesca and her photographer boyfriend, Tyler. She is having serious issues with the way he pushes her during their modeling shoots. He pushes her to face her fears and stand on a high ledge of a bridge and while the shot is beautiful, Francesca totally unravels because of it. She feels that Tyler may be a loving boyfriend, but when he is in work mode he pushes her to much and it makes her feel like he doesn’t care at all about her. He kind of blows it off as being artistic and she walks away upset, feeling unheard. He tells her she can handle anything but she feels otherwise and seems extremely upset over the situation. She realizes that she needs to set better boundaries for herself.

Dina and Clint are attending her friend Tito’s wedding. He is a very good, old friend and Dina is thrilled to be there. She is worried about her daughter Morgan who is camped out in a room with her friends. Dina sneaks upstairs to try and surprise the girls. She expects to find a huge 80 person party and instead finds four girls in bed doing their nails together.

Tyler and Francesca are bracing for a gallery opening. They both talk about being nervous about how the pictures they’ve done together will be received. We then cut to Dina driving with Morgan and Morgan raking her over the coals. Dina says that Morgan proves time and again that she is trustworthy and that she doesn’t need to be quite so worried about her.