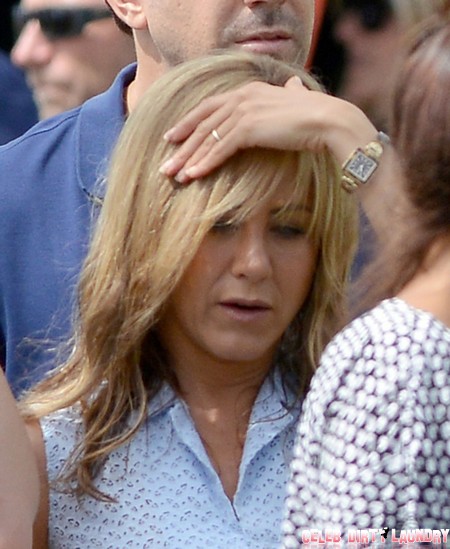 There is nothing like a formal engagement to be married to get a family all worked up about looking their best.  And Jennifer Aniston’s engagement to Justin Theroux has provided the impetus for Jennifer Aniston’s mother, Nancy Dow, to seek out a new face.  A new report explains that Nancy wants to look her best for her daughter’s wedding and so she has planned a major cosmetic surgery overhaul.  Let’s hope that she doesn’t piss off her darling daughter, again, and get left off the guest list.  Nancy doesn’t want to have all that expensive plastic surgery and then not appear in the wedding album.

Jennifer didn’t bother to invite her own mother to her ill-fated wedding to Brad Pitt in 2000 – she was sulking over both an interview that Nancy gave in 1996 and a revealing book her mom wrote in 1999 – ‘From Mother and Daughter to Friends.’  Jen didn’t talk to her own mother for nearly ten years – now that is one cold-hearted bitch.  You don’t want to cross Jennifer Aniston!  It’s a wonder that Angelina Jolie is still doing so well…   Guess Angelina just has more mojo and better hoodoo than sulky old Jennifer.

GLOBE Print Edition, September 3rd has the story:  Jennifer Aniston’s mother, Nancy Dow, is so excited over her daughter’s upcoming wedding, she’s having a makeover to look her best for the big event, say sources.

“Obviously this will be a huge deal for Nancy, so she’s determined to look as fresh as possible,” says a source.  “She plans to undergo a few procedures to make sure her face is smooth and wrinkle-free on the big day.”

What about Jennifer?  If she actually manages to drag Justin to the altar we know she’ll want to look her best.  Jennifer loves plastic surgery and relies on it as part of her regular beauty regimen.  Celeb Dirty Laundry has presented evidence of Jennifer’s plastic surgery obsession before and we are sure she will indulge in some more ‘self-improvement’ before marriage.  In fact Jennifer’s bloated puffy appearance during the filming of ‘We’re the Millers’ indicates that she and her doctors are already preparing for the big day.