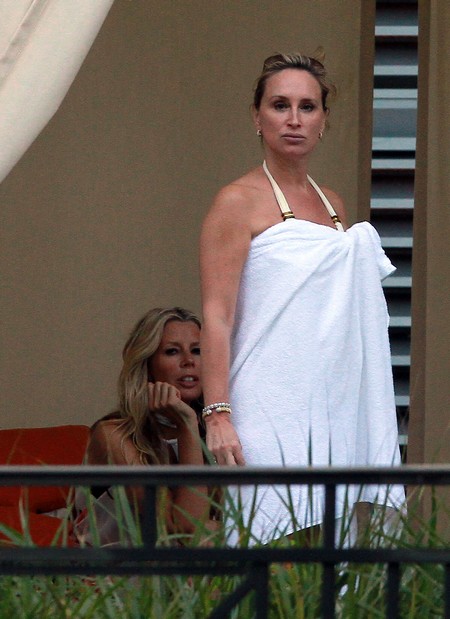 The war of words continues for the ladies of The Real Housewive’s of New York City!  The past few episodes have been wrapped around a gluttonous vacation to St. Barts, a trip that was originally intended to be a girl’s trip until Aviva Drescher brought her husband Reid. Okay, actually he had to fly with her and escort her like a Delta Flight Attendant does with a child, because Aviva is terrified of, well, most everything. She seemed to believe that the ladies should have welcomed her with a party and a banner just for stepping off the plane (her words) and the ladies thought otherwise.

Ramona Singer and Sonja Morgan felt that Reid’s arrival changed the dynamic of the trip and once they voiced that, all hell broke loose. Aviva turned into a combination of evil dorm mother/Gestapo officer as she lambasted both women for their hard partying and slutty hook ups. Two entire episodes later, after watching Aviva show her true colors and act like an uptight, entitled bitch I had no choice but to conclude that she’s far worse than any of the women she chose to take constant aim at. Way to ruin EVERYONE’s trip! No wonder Sonja has nicknamed her, “A-Diva” and let me tell you, she wears the moniker well! Sonja took to her personal blog to address the whole disaster trip, commenting to on being called “white trash” by A-Diva!

“Ramona and I had a good laugh about the “white trash” comment. We’re white, we act silly, and we OWN it.  Isn’t it funny how after telling us all over and over about every single one of her phobias and anxieties, that A-Diva then says, “Meh, the plane wasn’t so bad. . .”, THEN WHY KEEP BRINGING IT UP! She cannot let anything go. Also she keeps telling us how embarrassing it is for her to have so many anxieties . . .THEN WHY KEEP talking about them?! I understand it must be difficult to be neurotic . . .but after a while enough is enough. Get help. You’re a grown up now.”

Now, if you’ve watched Sonja in action this season you’ve watched as an attention seeking, whore slowly begins to completely unravel. But she does OWN it!  She freely admits to getting all sorts of bruises while banging her island hook up in the back of the gardens. She drinks and makes no apologies when her clothes instantly fall off. She is trashy and she knows it. She embraces it. And she is absolutely right about A-Diva. She is using her anxiety issues to grab extra attention and that makes her far worse in my mind. Sonja at least, is trashed while pretending to be an aging, low budget porn star. A-Diva is sober and just can’t stop rambling on about everything that’s wrong with her!

What do you think of the continuing cat fight between A-diva and Sonja? Tell us in the comments below!