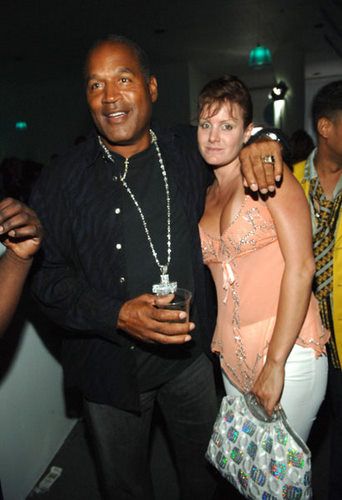 Before we bring you a tirade of salacious O.J. Simpson news, we have to ask the all important question, “Who would date the scariest dude this side of Freddy Krueger?” He is to the justice system what a Mars bar is to Weight Watchers – always there, but no-one dares touch it. According to a latest National Enquirer report, the self-entitled and irresponsible Simpson is pissed off at his ex-girlfriend’s incessant arrests. In order to clear up any ambiguity – the ex-girlfriend isn’t a rogue police officer with ties to the Chinese Mafia; she’s a walking, talking drug and alcohol problem.

A source close to OJ said, “O.J. has been trying to keep a low profile in prison because he desperately wants the judge to give him a new trial. When he heard Christie [Prody] was back in the news, he was appalled. O.J. said, ‘That woman is making me look real bad. Every time she screws up, my name is dragged into it!’” Oh, now we’re worried about reputation all of a sudden?

Simpson and Prody have been dating on and off (more off than on) for 13 years. He met Prody in the late 90’s, after his murder acquittal, but she’s been battling with drug and alcohol problems throughout the 13 years of their horrid and sordid love affair. Simpson’s arrest and subsequent incarceration in 2008 forced Prody to return to her hometown to restart her life as a nursing assistant. In April, Prody was arrested for swiping painkillers from the home where she worked as a nurse’s aide. She was ordered to attend rehab after she was found guilty in a court of law.

Alas, her demons were not letting up that easily. A second arrest took place in September, when Prody was caught red-handed stealing someone’s purse at a mall in Fargo, her hometown. This time, however, Prody won’t be released with a slap on the wrists and a trip to rehab. According to the source, “Christie was let off easy on the first theft incident, but she’s in deep trouble now. With this latest arrest, I’m afraid the judge will throw the book at her and send her to prison.”

Her ex-lover, Simpson, was sentenced to 33 years in prison after being convicted of stealing sports memorabilia at gunpoint at a Las Vegas hotel room in 2008. He will have no possibility of parole until 2017, a full five years from now. However, lightning struck a second time in October, when a judge agreed to reopen his case after his appeals attorney accused his trial attorney, Yale Galanter, of misconduct. This strange turn of events might see Simpson being granted bail and released from prison earlier than expected, but according to sources, “He’s worried that Christie’s arrests will hurt his chances. O.J. doesn’t care for Christie anymore, but he doesn’t need her making a spectacle of herself. He’s worried that her problems are going to affect his image. He said, ‘Man, I can’t believe she’s doing this to me! I finally catch a break, and here she comes screwing things up!’”

Why does anyone still care about what happens to O.J.? Isn’t the 67-year-old acquitted murderer long past his heydays of infamy and white Bronco’s? Let us know your thoughts in the comments below.