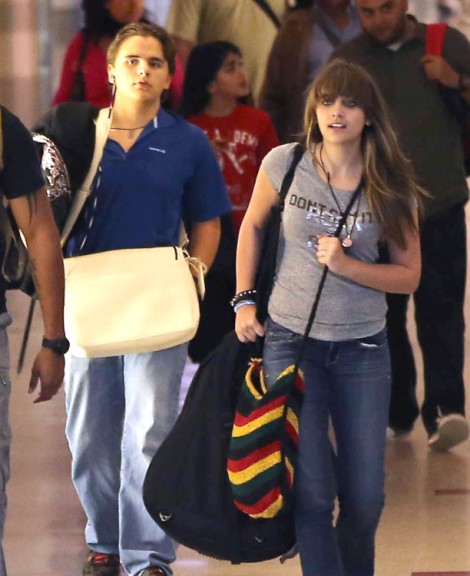 It seems like Britney Spears’ ex-manager, Sam Lutfi, has his eyes on a new up-and-coming starlet. When he’s not been suing Britney Spears for millions and dishing embarrassing stories from her meltdown days, Lufti’s been trying to entangle himself in Paris Jackson’s young and impressionable life.

“Sam has been telling people in his inner circle that he is talking to Paris Jackson. Why would a grown man be in contact with a 14-year-old teenager?” a source told Radar Online. “During a recent event for Mr. Pink’s Ginseng energy drink, in which Lindsay Lohan and Paris Jackson were in attendance, Sam was trying to arrange a photo op for the two on the red carpet. Sam can be extremely charming and extremely likable, but Paris and her guardians, Katherine and TJ Jackson, would be wise to cut off all contact with him. Sam inserts himself into the lives of vulnerable females – look at his involvement with Britney when she was at her lowest point. Sam now manages Courtney Love and nothing more needs to be said about her.”

Sam manages Courtney Love? Wowsa. That sounds like a recipe for disaster. But I have a hard time thinking he can get his fangs into my girl Paris. Paris is a Jackson and, yes, the Jacksons have a bad habit of trusting untrustworthy people (cough, cough, Conrad Murray). But she’s really impressed me lately with her bad ass attitude. She not only ripped into her entire family on Twitter (when those dumb asses totally deserved it) but she also went toe to toe with auntie Janet. She can handle Lutfi. Because let’s face it, Paris is no Britney and that’s a compliment. Is it too early to think the 14-year-old is well-adjusted? This is a girl who was raised by Michael Jackson’s crazy circus and was forced to wear masks in public. Homegirl gets a pass on a few scandals from me but she hasn’t collected yet and for that I’m immensely proud. But she also hasn’t had her first love in the public eye yet. Let’s let Paris  have a Taylor Swift-worthy infatuation and then we’ll see how she does with someone like Lutfi. Britney only went crazy after Justin Timberlake dumped her after all. God forbid a girl break up with her boyfriend and actually be able to function.

If I were the Jacksons I’d worry less about Lutfi and more about Paris going to the same events as Lindsay Lohan. She’s a succubus and will attach on to someone else’s fame just as easily as Lutfi and she might be harder to get rid of. Just as Samantha Ronson.

Is Paris Jackson Sam Lutfi’s newest conquest? After all the  negative attention he’s getting from the Spears trial, wouldn’t you think Paris would know better?