Prince Charming? Prince Harry Only Screws Blue Bloods Because He Can Control Them 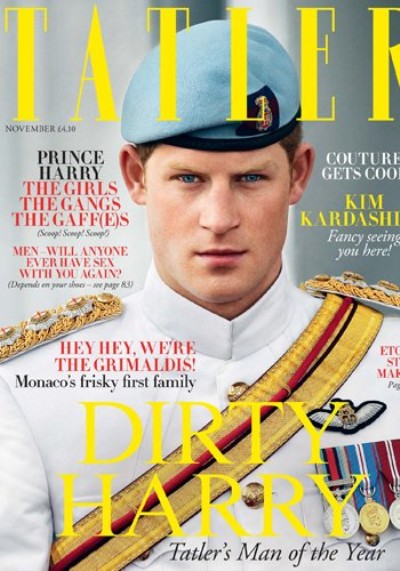 Tatler magazine has a feature on Prince Harry this month, and although it basically tells the same old wild prince/dirty Harry type stories, some of the info is quite interesting. Like the fact he only messes around with aristocratic girls in his circle because he knows they can’t blab after he screws them and leaves in the morning. He knows these rich chicks won’t sell stories to the press because they (and their families) have too much to lose. Very smart Harry. Very smart.

In addition, Tatler discusses his overwhelming love for Chelsy Davy who it calls the “the antithesis of all things Middleton.” Check out the good parts below via the Daily Beast.

On Chelsy Davy: “Chelsy used to drive him mad. She knew how to press his buttons and was quite capable of turning off her phone for days if he’d pissed her off, or of leaving a club without him if she thought he was acting like a dick. ‘Harry has never felt the same about anyone as he did about Chelsy – mainly, I think, because the other girls he’s been with have been too eager to please,’ says a source.”

On swiping photos: “At a house party in 2007, one disgruntled guest remembers having her whole camera wiped because Harry’s  security guards thought that there was a photograph of the prince inhaling a laughing gas balloon in the background. ‘They came over and deleted all my pictures. I wasn’t even taking a photo of Harry. It was bloody annoying.'”

On Prince Harry’s girlfriends: “(Harry) made an executive decision a few years ago to go only for girls who had enough to lose by going to the press; consequently, those he has tended to pursue come from a very small catchment. This – maddening though it is for the girls, who all tend to know one another – has been key to keeping his sex life out of the public domain.”

There’s a lot of good stuff here, right? I love the part about the girlfriends. Suffice it to say Prince Harry’s blue blooded dating pool has got to be small and everybody knows each other. That doesn’t even faze him. He just screws his way through it and lets the girls figure it out. Do all those chicks just give him a pass? Do they acknowledge he’s screwing all of them but let it happen because everyone wants a shot at becoming a princess? It’s so incestuous! But this is the royal family we’re talking about.

The article also said Harry used to hide while smoking at school and his security minders would tip him off if they saw a teacher coming. Now, that just pisses me off.

Oh but Chelsy! His one true love. I love me some Chelsy even though she comes across as kind of a bitch in this story, right? She reads Harry like a book and does NOT let him play her. I appreciate that but I wonder if he needed a softer approach from her at times. Or would he just have steamrolled over her if she went easier on him? They need to get back together. She’s the anti-Middleton. Think of the stories that would come out of Kensington if Chelsy was there. Kate complains to Prince William because she walked in on Harry and Chelsy going at it in the library! It could happen. Naked boobies in Provence will have nothing on Harry and Chelsy. But you’ve got to think Kate’s scandal has scared off Chelsy for good. Chelsy has had a wild past. Who knows what kind of pictures are circling of her. If the press went after perfect Kate, what would they do to Chelsy? She doesn’t want to be scrutinized by the whole world. I’ve been holding out hope that Chelsy would come back but Kate Middleton’s boobs have ruined it for all of us. Damn you boobs!

Are you surprised by the Prince Harry Tatler story? Do you think his womanizing is a bit heartless or is it just par for the course for a prince?