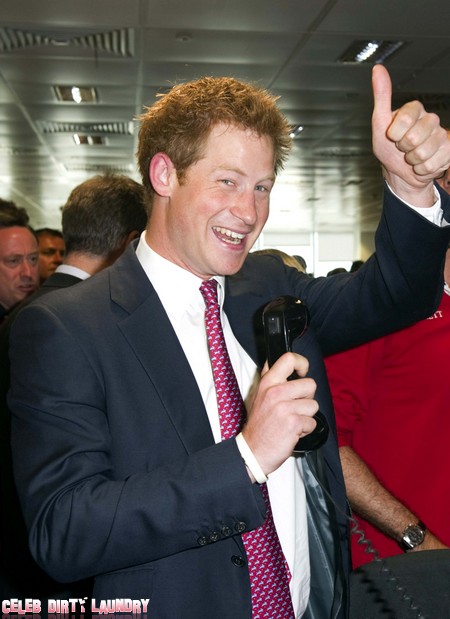 Prince Harry has the hots for Kate Middleton’s dirty dancing distant cousin Katrina Darling.  Apparently Harry saw a photo of Kate’s cousin, Ms. Darling, in all her exotic dancer glory and he was hooked!  Prince William will have to give his younger brother a thrashing if Harry doesn’t get over this quickly.

It turns out that Katrina is a model and stripper who is Kate’s second cousin, once removed. It seems that Katrina’s grandmother, Jane Darling, is the sister of Kate’s great-grandfather, Thomas Harrison. Although Kate and Katrina have supposedly and there is no way Queen Elizabeth II will permit Prince Harry to date a woman who takes off her clothing for money.

GLOBE claims to have a source who reports in the print edition April 2nd:  Prince Harry telephoned Duchess Kate and said:

“Where have you been hiding her?  She looks fantastic I want to meet her.”

A laughing Kate told him to cool his jets since there is no way she’d set up that meeting.  “I’ll save you from each other,”

She chortled.  At a recent gig in New York City Katrina did a ‘God Save The Queen’ strip act in which she strips down to pasties, thong, and crown.

The not so modest Katrina says:  “I take off my clothes. But don’t give anything away that should be for someone else.”

The source adds:  “So while Harry is still up for grabs, a fling with a dirty dancer who wears a crown as she strips off her clothes is certainly NOT going to get the royal deal of approval!”

We can be absolutely certain of one thing here – Prince Harry’s Grandmother, Queen Elizabeth II, would rather her grandson stay single than hook up with a striptease artist.