Prince Harry ‘Carrie’d Away In Vegas! His Booty Call’s Spilling All The Naked Details! 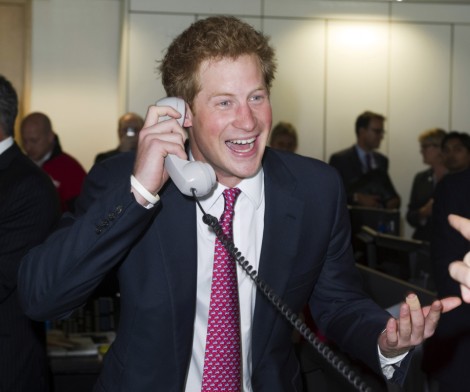 The next time Prince Harry wants to party I hope I’m around because he knows how to do it right. According to the prince’s  fling that infamous night in Las Vegas, Harry was all about the love… and flashing his royal peen to the city that never sleeps!

Carrie Reichert told the UK’s Mirror that she made out with Prince Harry for 20 minutes but it wasn’t everything the Disney movies said it would be. “It wasn’t romantic, just fun. He was so wasted, the alcohol affected him,” she said.

Wait, you mean like affected him, affected him? Like couldn’t get his soldier to salute? So maybe there’s no sex tape after all? If there is, Carrie says it wasn’t made with her but there were about 9 other girls who were hand picked by Harry’s entourage to come up and party with the prince in his suite.

“There was billiards being played. Harry was being randomly funny, going from the billiards to the bedroom. He wasn’t the only one ­naked. There were girls naked. The guys were half dressed,” she said. “It was not like an orgy going on, it was just sexy naked. It was like almost a game. He was trying to get everybody to get naked. That was the whole point of him being naked. Girls were getting naked, he was screaming out ‘Everybody get naked!’ Just randomly doing crazy stuff. He was pressing his body up against the window and saying ‘Look at me Vegas!’ because he’s got this huge ­window and of course you can see all of Vegas down the strip. Just pressing up against the window just like, ‘Look at me Vegas, these are the royal jewels’.”

Can you see Harry doing that? Hells ya you can! Amazing! But what the hell does “sex naked” mean? Anyway, after that Carrie was apparently so turned on she allowed Harry to escort her back to his bedroom.

“He said that he liked my eyes and was just going on and on about the military. He didn’t make too much sense. Then he grabbed my hand and we went back to his room. There was not very much talking at that time, his clothes were off. I had a bikini on. A string bikini. I had a party dress over that, and that came off. And I just had a bikini. We kissed for 15 to 20 minutes. I am sure somebody ­stumbled in as there were people going in and out of rooms all the time. We kissed again and he said ‘That was great’. He told me I was beautiful and ­gorgeous, which was sweet. Then we kind of nonchalantly returned to the party and kept drinking. We went back into the living area and I assumed people knew but ­everyone acted like nothing happened. A little bit after some girls passed out on seats, and I felt I needed to go back to my room so I did.”

Harry’s a sweet talker! He didn’t just snap his fingers and point to Carrie and then to his junk, rather he wooed this little blond British born delight. I got to say though, I appreciate this chick’s story. She basically just admitted to the world that she let a dude who was barely coherent and running around naked to use her. In her defense, I’m sure he was really convincing when he gave her the beautiful eyes bit. She also just admitted that people were walking in and out while Harry was feeling her up. There have got to be pics somewhere!

But you’ll notice, she didn’t talk about cocaine or any other drugs. She had to have seen them if they were there so why didn’t she talk about them? Better question, why wasn’t she asked about them? They’re the new hot subject. Everyone wants to know. Was Harry doing blow? It actually doesn’t sound like it. Homeboy was tanked pretty early and was probably bear hugging the naked chick in the photos so he wouldn’t fall on his face!

But now I’m REALLY worried for Prince Harry’s reputation if a tape is getting shopped around. What’s worse – looking kind of awesome in a hot sex tape or fumbling all over the place and not being able to get it up on video? Ouch… I’d imagine Harry’s ego would prefer the former but it doesn’t sound like that’s the case!

Are you surprised that Harry was a drunken mess? Do you even care anymore or are you excited for more stories to come out detailing his crazy night?