Prince William Regrets Being Tied Down To Kate Middleton 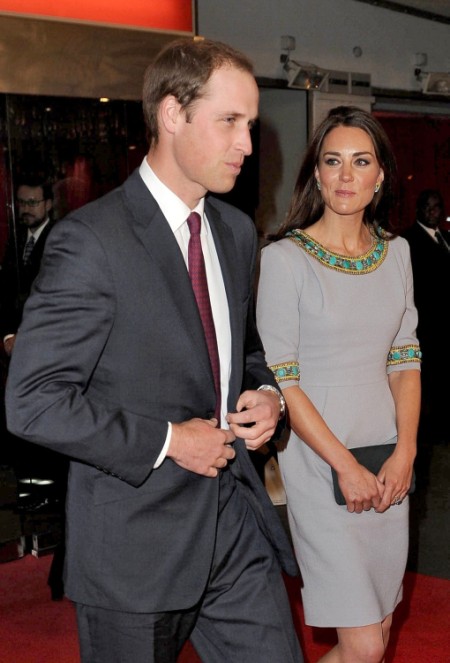 After ten long years together and a royal wedding that people still cry over, Prince William is worried he wasted his young, crazy playboy years being tied down to Kate Middleton. Will is bitching and moaning over the fact that Prince Harry can use any girl that throws herself at him (which is pretty much every girl) while he has to get ready to play the doting father – something he nor Kate are ready to do despite what they tell the media.

Star magazine (via Celebitchy) has the scoop:

Barely a year after their nuptials in Westminster Abbey, royal insiders describe Prince William and his wife Kate not as glowing newlyweds but as a dispassionate couple stuck in the sexless rut of a decade-long relationship.

“William’s been with her for more than 10 years,” Nicholas Davies tells Star. “He missed out on all the fun once he and Kate met at university.”

William’s military commitments have also been the source of friction – or lack thereof. Starting in February, the couple were apart for almost two months as William, a pilot in the Royal Air Force, was sent to the remote Falkland Islands to fly rescue missions with his helicopter unit. Unpon his return, family obligations for the Queen’s many Dia,ond Jubilee celebrations have resulted in a little too much alone time for his bride.

Even when William is “home,” Kate is forced to spend long, lonely nights at their isolated country estate while her husband is at his base in Anglesey, Wales, eight miles away.

“More often than not, it’s a case of off to bed for the night on her own while her husband is working,” says one source, while royal expert Davies puts it more succinctly: “Lord knows when he finds time for sex with Kate.”

There’s another reason the royal bedroom has been so boring: neither William nor Kate, both 30, is ready for a baby. The Windsors have a long tradition of quickly getting down to business, but the prince isn’t ready to play papa.

“As a royal, he’s expected to father an heir immediately,” Davies explains. “But I can only speculate that right now he’s reluctant to get tied down with a family.”

William isn’t alone. Kate is having to much fun playing global fashion icon to get busy. “There have been rumors that Kate has had difficulty conceiving, but my guess is that she doesn’t want to spoil that gorgeous figure,” Davies explains. “The flight attendant’s daughter is suddenly the world’s most adored fashion icon. With a baby, the glamour would be over.”

Prince Harry isn’t helping matters – he’s repeatedly joked that his older brother became “middle-aged” after the wedding. And having a front-row seat to Harry’s well-documented bachelor lifestyle hasn’t made things easier for William.

“He sees Harry with a string of beautiful girls, and he must regret missing out on so much because he was tied to Kate,” says Davies. Harry’s peer pressure appears to be working.

In June, William was pictured leaving a London bar with an old hell-raiser pal, nightclub owner Guy Pelly. Another time, he was spotted enjoying a raucous night out with a friend in Surrey –with no sign of Kate. Does William want to make up for lost time?

“Some feel he should have sown some wild oats before settling down,” one veteran royal correspondent tells Star. “You just hope he hasn’t got married too young and is tempted by other women.”

Says another: “William is definitely breaking out on his own. He enjoys a booze-up with the boys, and he’s no longer living in Kate’s pocket.”

OK, let’s take this story with a grain of salt and have fun! William comes off as a major douche, right? And that surprises me since he’s Princess Diana’s son and has always been loved by the media even though he can act crotchity a lot of the time. But Kate has such massive appeal right now and William is paying for it in the tabloids. Happy marriages don’t sell and someone has to be the bad guy.

Doesn’t it seem like Harry would change places with Will in a second? William might be jealous of his brother’s freedom but Harry really wants to settle down with someone. He loves having Kate around and I think he’s jealous that William has a partner to navigate the royal duties with. It kind of makes me sad for him. Hurry up Chelsy Davy! Get over yourself and help him out!

But I’m not saying boo hoo Kate or Wills here for a second. First of all, it’s common knowledge that Wills broke up with Kate A LOT (probably more than we know) to sow some wild oats and she took him back every time because she knew what he was doing and accepted it. I wonder if she would accept it now. They have been spending more time a part. Do you think she gets nervous? I wonder if the idea of his having a mistress is talked about. I heard that it’s par for the course for a Windsor male to have a woman on the side. Prince Charles is well known to have allegedly said, “I refuse to be the first Prince of Wales in history not to have a mistress” and not much has changed in thirty years.

As long as William doesn’t get caught and embarrass her, I think Kate would probably look the other way. Diana didn’t, but she was much younger and more irrational than Kate. Kate’s shrewder then we give her credit for and she’s got to assume it comes with the territory. Being a princess isn’t all tiaras and designer clothes. Do you think the royal honeymoon is over for the couple or will a Kate Middleton baby bump put all our fears at ease?