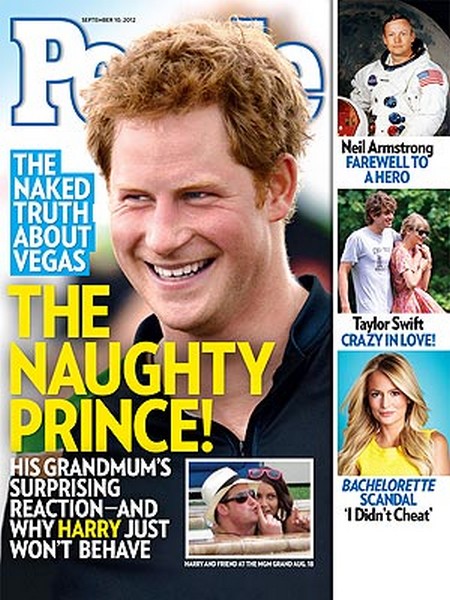 As we all know now, Prince Harry got naked and partied with commoners in Las Vegas.  Not only did Harry engage in this outrageous behavior but the genius was photographed, and probably filmed, doing so. This is not the royal protocol for vacations for the man who is third in line to be the King of Great Britain.  These royals are very stuffy with their archaic traditions and protocols as we have seen recently.  As we reported on Celeb Dirty Laundry, wonderful Kate Middleton was commanded, by Queen Elizabeth II herself, to bow and scrape before certain jealous senior royals whenever she is in their presence without Prince William.  Well I don’t think anyone in Royal Town is terribly concerned with Kate since Harry got caught with his pants down.

People Magazine has a cover story that promises to reveal Queen Elizabeth’s true reaction to what must be a horrible blow to the old girl.  Coming right on the heels of her Diamond Jubilee celebration and the London Olympics Harry’s screw up must have the Queen absolutely enraged.  But according to People the Palace is downplaying the incident.  What choice do they really have – England no longer has the  death penalty…

People reports: Prince Harry has been lying low ever since nude photos, taken during his weekend of debauchery in Las Vegas, hit the Internet last week.

But according to the Palace, the Party Prince, 27, has nothing to be ashamed of.

“He didn’t do anything unlawful,” a Palace source tells PEOPLE in this week’s cover story. “What he did was entirely his own business.”

And according to sources and royal watchers, as third in line for the throne, behind his father, Prince Charles, and brother William, 30, Harry won’t likely be changing his stripes any time soon.

In the coming days, he’s set to resume official duties in London: attending the Paralympics on Aug. 31., and the WellChild Awards ceremony on Sept. 3.

“Harry is a big boy now,” says Dai Davies, former head of royal protection services. “He knows the rules, but he thinks, I’m going to do whatever I want.”

So you see, fellow commoners, when you are royal you can do WTF you like without consequences!  I guess that’s why we don’t let them actually govern us any longer.

Also on the cover of this week’s People we see Neil Armstrong: Farewell to a Hero – a true explorer.

Next is Taylor Swift – crazy in love with Conor Kennedy – or is that simply Taylor Swift crazy?  We are promised details on the Jackie O. wannabe’s absurd infatuation with a scion of America’s version of a royal family.

Lastly the People cover lets us know that The Bachelorette Emily Maynard says ‘I didn’t cheat.’  Right, and neither did Kristen Stewart.