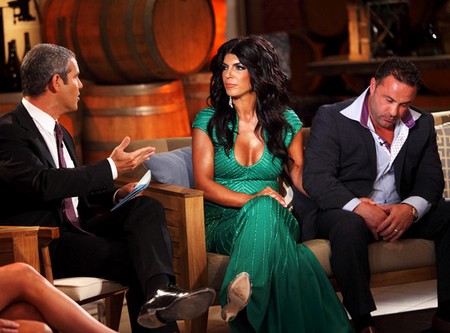 The Real Housewives of New Jersey is the ingenious brainchild of Bravo and with this particular pairing of women it was inevitable that if they held court in front of the cameras for enough seasons, the end result would be evil hatred across the board. That, my friends, is pretty much all that’s left and it is kind of sad. I mean, if you think back a few years, these women really were housewives living in their own version of the lap of luxury in Jersey. They had money, mansions and interesting families. Back then, they were friends. They talked and gossiped and I’m sure that never in a million years did any of these ladies think that their deepest, darkest secrets would be revealed on camera or in print. The fame has ruined these women and turned the majority of them into catty bitches that will do virtually anything to stay relevant. They take turns lying, backpedaling and denying allegations because no one wants to admit to being a flawed human being on television.

After two Real Housewives of New Jersey Reunion specials where the ladies were literally at each others throats, finally Joe Giudice sat beside his wife Teresa Giudice to emphatically deny being a cheating Jersey, man whore. Something 95% of viewers believe is a crock of crap. C’mon Juicy, we all know better!  Anyway, he swore to Andy Cohen that the much-talked about vineyard phone call was NOT to another woman. Here’s in a nutshell what both Joe and Teresa said when questioned on the reunion stage,

“If I was talking to a girlfriend I probably would have ripped my mic off and threw it in the bushes. I basically shouldn’t have said what I said to her. That word isn’t even in my vocabulary. I messed up. What you gonna do,” Joe explained.  “It’s for better or worse. For him just saying that word I’m not going to divorce him. He apologized to me. We’re happy together,” Teresa said.

On Sunday, the rest of the RHONJ husbands will finally have their own opportunity to confront both of the Giudices for their treatment of absolutely everyone. Chris Laurito is furious over Teresa accusing him of cheating on Jacqueline Laurito and he also is upset because it hurts him to see his wife hurting over scumbags like Teresa and Joe. Teresa has also viciously attacked Kathy Wakile and her husband Ritchie couldn’t stand the Giudices in the first place. He’s old world Italian and may just decide to settle it the old fashioned way.

Last but certainly not least is Joe Gorga, Teresa’s brother and Melissa Gorga’s husband. Teresa has spent most of the season systematically trying to annihilate his marriage and destroy his wife. Joe Gorga and Joe Giudice NEVER get along as it is and punches often fly when these two are fighting so I’m betting on some action especially when a beat down is pretty well deserved!

Will you be tuning in on Sunday to hear what the men have to say?  Do you think it’s time for these Bravolebrities to pack it in and return to normal life for their own good? Tell us in the comments below!