Sonja Morgan: Gold Digger and Proud of It! 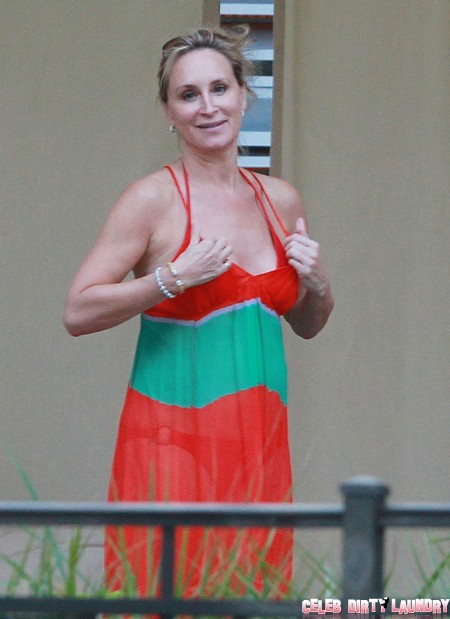 The Real Housewive’s of NYC’s Sonja Morgan has come under a dump truck load of scrutiny lately.  She has had a very public battle with cast mate, Aviva Drescher, mainly because of her hard partying in St. Bart’s with Ramona Singer. It’s true, Sonja is no angel. She’s single and likes to have fun, ok a LOT of fun but her drinking in recent episodes has left viewers talking. She has been filmed drunk, naked, stripping and has talked freely about screwing a random guy in the back of a garden while on the island. In other words Sonja is a mess and last night we got a clue as to why.

She was supposed to have a face-to-face meeting with her ex-husband, John Adams Morgan, a Morgan-Stanley heir, to hash out settlement details once and for all. They ended up in opposite rooms with no contact which is something Sonja felt she needed, at least emotionally. She’s in a desperate financial situation after filing for bankruptcy and needs the money to stabilize life for herself and their daughter. She explains it herself in her latest blog saying,

“When I didn’t get my face-to-face with him, and a fair way to do that (not even close, according to my lawyers), I was angry. It’s been so long that I have been working and supporting so much on my own beyond what child support can do. My assets and cash are tied up in this divorce and I want what is rightfully mine, and to be independent again so I can move on. If it means losing our home and a lot of what I have worked my whole life for, then I would have to continue in court to fight, in other words sue, for cold cash. It’s not what I want to do. . .It takes time, energy, and money away from my daughter. We were married 10 years and knew each other for seven years before. It’s a large chunk of my existence! As the woman who loved her man dearly, I think I deserve that respect as the mother of such an amazing little girl. I was a good mom and wife. I never would have imagined it ending, myself. NEVER”.

It’s kind of strange to me because while Sonja says she never saw the divorce happening she also claims that she is simply fighting for what she was promised if they ever did split. Couples that are truly in it for the long haul don’t reassure each other of financial stability on the off chance that they should split, do they?  I understand wanting to provide the best life possible for your child and fighting to be able to do so, but perhaps Sonja is trying to maintain a style of life that is simply unrealistic for any single mother!  She is surrounded by women that are married and loaded with cash and she consistently tries to keep up with that status quo, except that is not who she is any more!

Downsizing even a little would do wonders for her books and feeling completely independent would probably make Sonja feel much better too, don’t you think?  Is Sonja gold digging or simply angling for what is rightfully hers? Tell us your thoughts in the comments below!