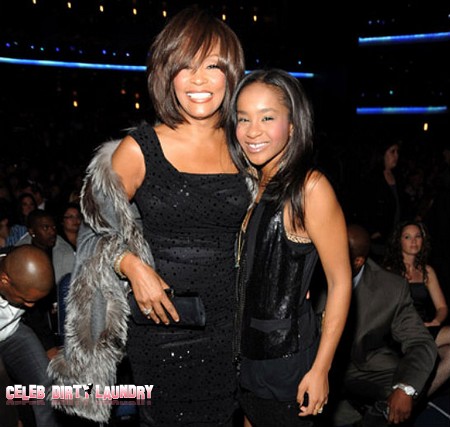 Bobby Brown is terrified that his daughter Bobbi Kristina Brown will find the hard core drug tapes he made with Whitney Houston.  Whitney kept videotapes of Bobby and herself using deadly combos of cocaine, crystal meth, and marijuana during their worst days of wild drug abuse.  While nobody knows exactly where the tapes are hidden, Bobbi Kristina is bound to come across them since she is Whitney’s sole heir.

Bobby is freaking since he is convinced that when his daughter discovers and views the horrible tapes she will permanently disown him.  Bobbi loved her mom, Whitney, more than anything in the world and if she thinks that her dad is responsible for her mom’s drug addiction she will hate him forever.

Bobby fears that the tapes make it seem that he is to blame for encouraging and pandering to Whitney’s deadly dance with hard drugs.  Ironically, it is a fact that Whitney was into drugs, including cocaine, before she ever met Bobby!

“He’s concerned that if Bobbi Kristina sees any of the tapes she’ll blame him for turning her mother into a drug fiend and shut him out of her life – and any of Whitney’s money.”

Even though Whitney died nearly broke, an industry analyst estimates her estate will be worth close to $50 million based solely on music sales – and much more when residuals from books, movies, and DVD sales are added.

MORE: Whitney Houston Was Already Hooked On Drugs Before She Met Bobby Brown

Another insider told The Enquirer:  “Some of the tapes include footage cut from the reality show ‘Being Bobby Brown’ and show them smoking pot laced with cocaine, as well as plates of the white powder on the tables.”

Even worse are tapes from the days when Whitney was doing a mix of crystal meth and cocaine – these tapes combine violence and drugs.  Bobby was really crazy in those days and according to the insider there were holes on the dining room wall where Bobby slammed his fist – and broken chairs were scattered all over the floor:

“Whitney took videos of the destruction… and the drugs.”

Another concern about Bobbi finding the tapes should be obvious.  The girl is already troubled – she has serious substance abuse problems and is dating her own step-brother.  Given her unstable mind, if she sees her mom at her worst in those tapes will it push her over the edge?  What do you think?  Is Bobbi in danger?  Let us know what you think in the comments below.