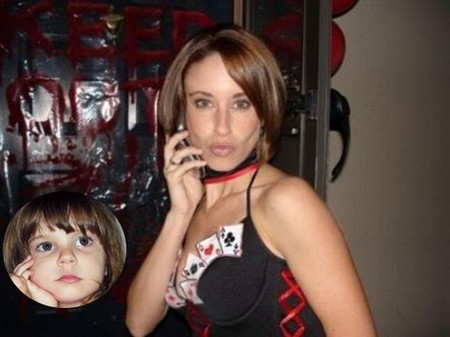 It has been one year since accused baby murderer Casey Anthony was acquitted by a jury of her peers, for the murder of daughter, little Caylee Anthony. Casey does not venture out of her house, out of fear for being recognized.  Her mother, Cindy Anthony, made her a special necklace with her daughter’s ashes and she now wears them around her neck. Wait, where are we? In some deranged episode of True Blood? Not even ‘ol Sookie Stackhouse would enjoy this little twist in the Anthony plot.

A friend of Casey said, “Casey told me it was the way the Anthony women would be together forever.” Cindy Anthony also wears the ashes. Since Casey walked out of jail on July 17th 2011, she has to stay in Florida due to probation, but she has moved around the state. She settled in West Palm Beach and stays online mostly, doing Google searches on little fluffy kittens playing with balls of yarn on the six pack(s) of One Direction. She has gained 20 pounds because Skittles and pizza work wonders for a disturbed conscience.

Prosecutor Jeff Ashton recently said,”I’m not going to get all weepy at the thought of Casey not being able to go out partying. She brought it all upon herself, and now she has to live with it – which is incidentally a luxury that Caylee will never get.” We have a strong suspicion Jeff Ashton had too much of the sarcasm juice from the lost-a-trial-aisle, but we agree, Casey does not deserve to go partying. She rather deserves a night of drunken debauchery with the Devil and Charles Manson before meeting up with Paula Abdul and Hitler, while they sing Death Metal karaoke and eat Cheerios. She has to pay for what we all know she has done and Karma isn’t touching that bitch with a twenty foot pole of Buddha.

What do you think readers? Is this too weird to be true? Does she deserve to be treated with respect? Do you think she killed Caylee? Let us know in the comments below.