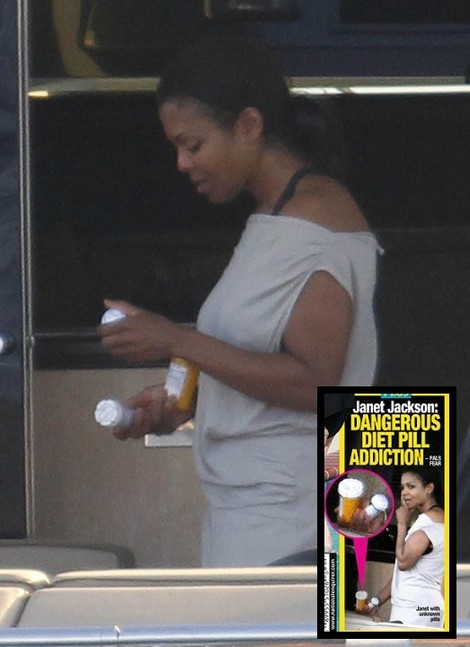 It doesn’t take much to send a person with a history of binge eating and drug abuse over the edge and Janet Jackson’s close pals are concerned that is exactly where the boob-flashing singer is heading.  Janet has had her hands full lately – between the kidnapping of her mother Katherine Jackson, the attempted kidnapping of her late brother’s children, and her very public battle with Paris Jackson – Janet has been losing her mind.

By her own admission she heads towards binge eating as a response to stress and Janet has put on 15 pounds recently according to sources. But getting fat is just the start of Janet’s problem – since she is obsessed with trying to stay slim, an inclination encouraged by her job representing the Nutrisystem weight-loss program – friends are concerned that she is abusing diet pills and will become addicted to the dangerous drugs.

The National Enquirer, Print Edition, August 20 tells the sad story: In a desperate attempt to cope with her families bitter feuding, Janet Jackson has slipped into a life-threatening tailspin of binge eating and popping diet pills, friends fear.

“Everyone’s terrified she could wind up getting hooked on prescription drugs like her brother Michael,” a family insider told The Enquirer. Concern for Janet escalated with the 46-year-old singer – whose been linked to binge eating and diet pills in the past – was photographed showing a handful of prescription bottles to boyfriend Wissam Al Mana while aboard a yacht on a recent Italian vacation.

“Janet has admitted to having lifelong struggles with her weight and how her brothers contributed to her depression and insecurities by calling her a ‘cow’ and a horse,” said the insider.  “Janet is only 5-foot-four, but at one time she was more than 180 pounds! She’s just a very emotional person and food has always been the answer for the stress.”

Some diet pills can also be addictive, especially those in the amphetamine family, notes L.A. addiction specialist Dr. Reef Karim.  “They are stimulants that, in the short term, may not cause harm and give you a pleasant hike, but in the long term they can cause organic damage,” Dr. Kareem explained.

And Janet may be looking for some relief after being so stressed out from her families painfully public battles over her late brother’s will and legal guardianship of his three children- Prince, 15, Paris, 14, and Blanket, 10, say sources.

Caught in the family crossfire the ‘Control’ singer – now a spokesperson for the Nutrisystem weight-loss program – has packed on 15 pounds hit the 140 mark and is coming apart, say sources.  “That’s heavy for her, especially since she’s trying to look slim for Nutrisystem,” said the insider.

“Janet has a lot of people she trusts around her,” said the insider “but right now she’s not listening.”

Could some of Janet’s recent outrageous behavior have been triggered by the diet pills?  These drugs are often amphetamine-based and amongst their many deleterious effects is crazy behavior.  What do you think?  Is Janet Jackson totally losing it?  Why can’t she just shut up and allow her late brother’s estate to be administered the way he wanted it to be?  After all, Michael certainly earned his reputation as an entertainment genius without any help from Janet.  Don’t you wish that she and her parasitic brothers would just go away?

Photos of Janet Jackson with several unidentified pill bottles while partying aboard a vacation yacht with her billionaire boytoy,  Wissam Al Mana.