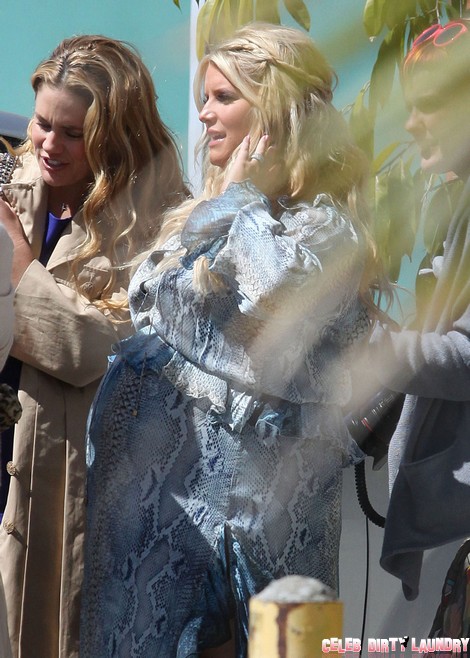 Rumor has it Jessica Simpson is just unstoppable in the bedroom (or “sexual napalm” according to John Mayer) and now a new report out this week is making us all speculate as to whether or not she is pregnant again.  If you remember just three short months ago Jessica gave birth to daughter Maxwell Drew via a C-section and at the time she made it perfectly clear that she had no intention of abstaining from sex with Eric Johnson for six weeks in order to give her body time to heal.  “I think I have the sexiest man in the world. So, that’s the rule I will break,” she said when asked about taking a sexual breather.

Jessica’s figure has been under the microscope since the day she gave birth to her daughter and while there have been a lot of candid shots of her leaving the gym over the summer, it doesn’t look like those pounds are falling off.  This week’s Star Magazine is reporting that Jessica’s whole problem may simply be that all of that summer sex has led to another pregnancy.  Says Star via Jezebel,

“Jessica’s figure looks nowhere near its old form and sources believe she “may be” expecting again.”

Now those sources are gynecologists that have never laid a finger on Jessica but I can tell you first hand, she could easily be pregnant.  Pregnancy almost immediately after pregnancy is so common they refer to the babies as “Irish Twins”.  Not exactly twins, but born within a year of one another.  Since Jessica was flaunting her intention of not being careful it does make it seem very possible that another bambino could be on the way.

Do you think Jessica is pregnant again or just having a hard time knocking off the original baby weight?  Do you know anyone who has had a set of ‘Irish Twins?’  Tell us in the comments below!