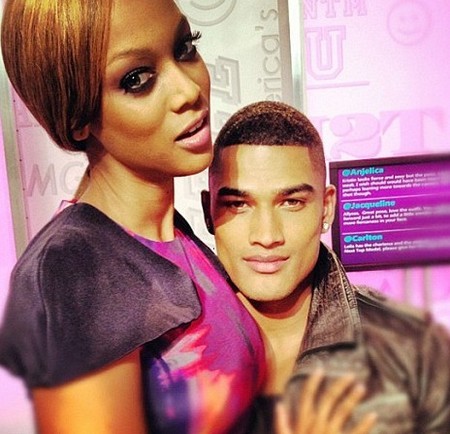 Tyra Banks likes her men and she likes them young, preferably about one-half her age. In the case of British model Robert Evans she is settling for an older man – Robert is 24 years-old! Tyra is pushing 40…  In any case the two are now a hot item.

Of course Tyra probably, and oh so erroneously, thinks that dating dudes that look like her sons makes her appear youthful. On the contrary, it cements her image as a middle-aged cougar buying her way through a candy store of young studs.  In the case of Mr. Evans, he is not only Tyra’s bed mate but her employee.  Tyra fired some of  her staff from last America’s Next Top Model worst ever last season and hired someone she could sleep with – young Robert will be a judge on this season’s show.

The pair, who have been cozy for about a month, were seen cuddling over dirty martinis at Palihouse in L.A.  Robert paid the bill and took Tyra up to his hotel room; a few days later they were spotted having a champagne brunch during a romantic weekend getaway to Pelican Hill in Newport Beach, Calif.  Go, Tyra!

Didn’t we spot Tyra sampling young rapper Drake recently?  Drake has recently become a famous tough guy – at last when his 300 pound bodyguards are around – and probably doesn’t want to be seen with an aging hoochie like Tyra.