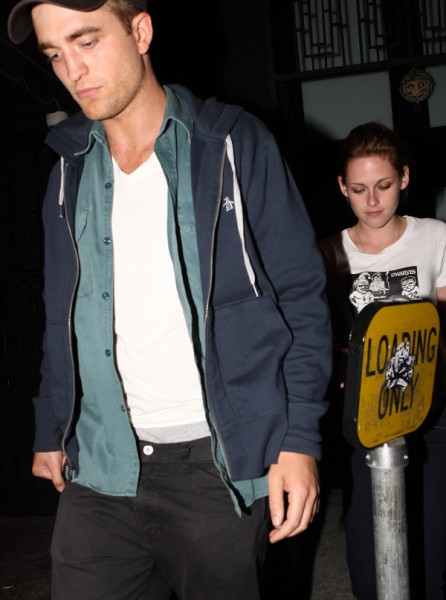 Which song do you think Kristen Stewart sang to the loudest – If I Was Your Girlfriend or When Doves Cry? I’m thinking When Doves Cry. I could see Kristen relating to that one right about now. But who knew Robert Pattinson and Kristen were Prince fans? I certainly didn’t see that one coming but just hours after the two landed from promoting Breaking Dawn – Part 2 in Tokyo and Australia, the two hooked up for yet another concert. Only this time, Kristen didn’t invite her dad to come along.

According to TMZ: “The couple formally known as Kristen Stewart and Robert Pattinson … reunited last night to see the artist formally known as Prince … in what appeared to be a real deal date night … and TMZ has the pic. Rob and Kristen rolled up to the Sayers Club in Hollywood in the same SUV … and sneaked into the back entrance to see the Purple One live in concert. A short time later, the couple rushed back into the car — trying to cover their faces — but it was too late … they’d been made.“

So this is why Rob didn’t wait for Kristen at the airport earlier in the day. They had concert plans! Well, Rob certainly wasn’t avoiding Kristen in this car. The couple appear very much together, right? And this was obviously not staged like those kissing photos. Rob and Kristen weren’t planning on getting caught this time around. So does this mean they’re officially a couple? Can we all agree that people who don’t want to be seen in each other’s company probably enjoy each other and want to be together? Or are there some of you out there who still believe this reconciliation is a big ‘ole hoax? I’m not gonna lie… I was nervous for awhile but I’m back on the love bandwagon.

So are Robert Pattinson and Kristen Stewart together? Does a Prince concert mean true love forever?