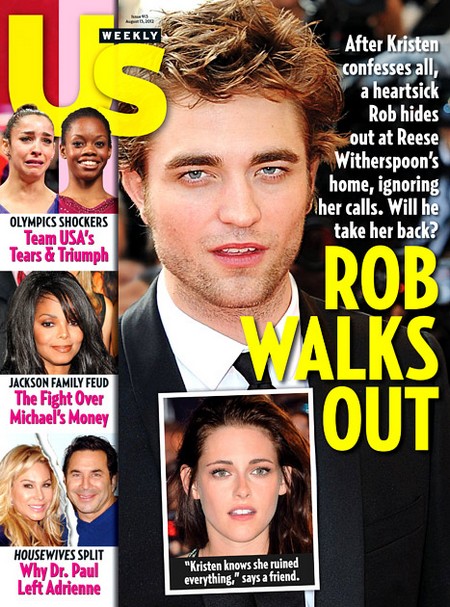 Robert Pattinson has been found and he may not be in a good place but he is staying at one. The same people who broke the story that Rob was being cuckolded by his cheating girlfriend, Kristen Stewart, reveal that he is hiding out at Reese’s vacation home! In fact the cover story of this week’s issue of Us Weekly claims that ‘After Kristen confesses all, a heartsick Rob hides out at Reese Witherspoon’s home, ignoring her calls.’ Hey, after Us Weekly managed to get photos proving Kristen’s affair with director Rupert Sanders, who is going to say they are wrong about this?

Of course Us Weekly adds the inevitable question to their cover, ‘will he take her back?’  As far as that goes – let me say that I certainly hope Rob never talks to Kristen again.  Her several-months-long affair with Rupert made a total mockery of Rob and her relationship with him.  Kristen might be feeling regret at being caught cheating but no way does this trampire love Rob.  Kristen was doing it with Rupert for months – it’s not like she got drunk one night and had a momentary indiscretion as she euphemistically referred to her long clandestine affair. Rupert himself is total douce and we hope that Liberty Ross (what a great name!) leaves him ASAP.  She can do much better and no worse.

Us Weekly reveals: Where in the world is Robert Pattinson? The unexpected answer, as revealed in the new Us Weekly, is Reese Witherspoon‘s vacation house.

The Twilight star, 26, has gone AWOL ever since he discovered that his longtime love Kristen Stewart cheated on him with director Rupert Sanders on July 17 (with Us Weekly first revealing the shocking pics July 24). False online reports claimed a U-Haul truck was spotted outside the L.A.-area home he shared with Stewart, 22, and that Pattinson had retreated to his native London to party with pals.

The real story? When the devastated Brit needed to get away from it all, his Water for Elephants costar Witherspoon, 36, offered up her tranquil, $7 million ranch in Ojai, Calif.

As Pattinson attempts to relax chez Witherspoon, he is, according to another source, “a total mess . . . He’s questioning everything.”

An “inconsolable” Stewart, meanwhile, has been reaching out via texts and phone calls.  “She’s dying to save the relationship. It’s the only thing she cares about,” a Stewart source says.

Indeed, Pattinson, who fell for his Twilight costar nearly five years ago, “doesn’t know what to do,” says a concerned friend.

What do you think about Us Weekly’s claim that Kristen has been trying to communicate with Rob via texts and phone calls?  What does she want to tell him?  Let’s imagine… ‘hey Rob, man up and pretend to forgive me – we have a big promotion of Breaking Dawn Part 2 to worry about so stop your bitchy sulking and get with the program.’  I mean what else matters in Hollywood?

What do you think?  Are you a sad Twihard still in shock over Kristen tearing out Rob’s heart?  Let us know in the comments. I always figured their entire relationship to be a showmance – only now that Rob has disappeared and appears truly devastated by Kristen’s whoring around am I starting to believe that he loved her.  Poor guy.