Robert Pattinson Wants Kristen Stewart Only On His Terms 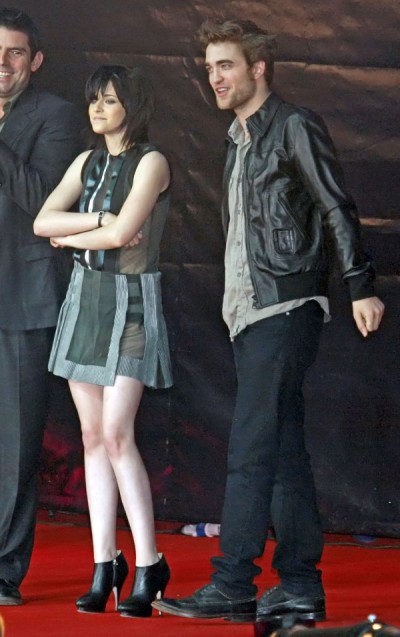 For now, Robert Pattinson is keeping things purely “professional” with ex-girlfriend (maybe current girlfriend) Kristen Stewart. A source told The Sun, he’s agreed to walk the red carpet with Kristen so he can prove to his fans that he’s the better man and above all the hate in order to give the people the show they want as Twilight’s last hurrah draws to a close.

The source said, “It’s a purely business decision. He’s keen to make sure fans and Hollywood see he can be professional when it comes to Kristen.”

I’m sensing this is a calculated move. Kristen’s people let it slip at TIFF that she and Rob are back together but his people were hesitant to make it widely known because they were afraid of the backlash from the fans. Fine. Now the stories coming out are all about Rob distancing himself from Kristen. Yesterday we reported they met with their people and couldn’t be in the same room without coming to blows. And today, this. Are these stories in response to Kristen’s TIFF story? Is Rob trying to keep his fans and his relationship? Will he and Kristen play the just friends card until the promotional tour for Twilight is over and then continue their love fest? That’s what it seems like to me. They’re probably just taking this one step at a time. Get Kristen’s first interviews over with at TIFF and judge the reaction and move on accordingly. It should make for a very interesting next couple months. There will be constant are they or aren’t they speculation which will make the studios happy and keep the Twihards on their toes.

Or I could be horribly wrong and Rob could still hate Kristen and really only want a professional relationship with her. I’m so confused! What about you? Do you think Rob’s distancing himself from Kristen in the press so no one catches on they’re back together? Or is it more straightforward? Is Rob still not ready to forgive her?