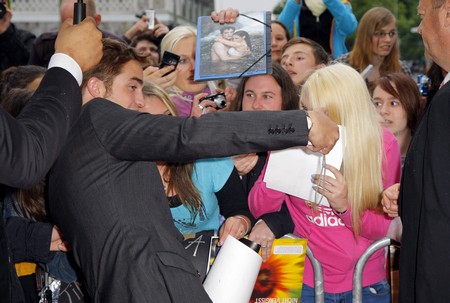 Robert Pattinson wants to give Rupert Sanders a good old beat down! Rob hasn’t had the best week of his life, after his longtime girlfriend Kristen Stewart was caught cheating on him with her director, Rupert Sanders, a married father of two.

Rob moved out of his and Kristen’s Los Feliz home on Thursday and now he wants to sit down and talk to Rupert about what really happened. Psychology teaches us that we should never make erratic decisions when we are emotionally charged, but Rob is beyond emotionally charged. His squeaky clean relationship with Kristen has been laid bare, like a burst pimple, oozing with puss and sadness.

An exclusive RadarOnline article reports, “Rob wants to have a man to man chat with Rupert to find out exactly what happened between him and Kristen. Kristen has already betrayed his trust by cheating, so he can’t be sure that she will tell him exactly what went on between her and Rupert. Rupert has a wife and a family to save, so Rob feels like he has nothing left to lose and would be honest with him.”

The insider revealed that Rob feels “doubly betrayed”, because he trusted Rupert with his girlfriend. The source says, “Rob really was blindsided by this and he’s going through the typical stages of being cheated on. He was hurt and heartbroken, then angry and pissed off, and now he just wants answers. He feels like he needs to know exactly what happened, how far it went and how many times, so he can figure out if this is something he can move past. He’s not ready to talk with Kristen, it’s too painful, so he’s going to Rupert.”

Kristen and Rupert publicly apologized to all those involved, but the sincerity of their apology has been scrutinized, especially after images were released on Thursday of Kristen and Rupert getting close and kinky in Germany in May of this year.

“Rob just doesn’t know who or what to believe right now,” the source said. “And he’ll do whatever it takes to find out the truth.”

Do you think Rob should speak to Rupert? Do you think it is a good idea? Let us know your thoughts in the comments below.