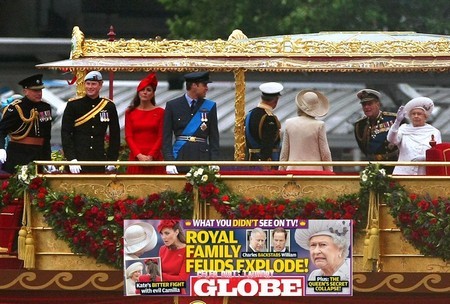 Though they gave off the picture of the perfect royal family over the Queen’s Jubilee celebrations last week, it appears all was not rosy for the Windsors and their bitter feuding which hit a new low just outside of the camera’s reach.

It feels like 1994 again but this time Prince Charles is backstabbing and disappointing his son, Prince William, not his ex-wife Princess Diana, and it’s Kate Middleton up against the formidable Camilla Duchess of Cornwall.

The Globe reports that Kate is continuing her viscous fight with her mother-in-law. The ladies have been at odds ever since  Kate caught Camilla talking smack about Prince William’s “mentally unstable” mother. Perhaps Prince Charles’ newfound popularity with the people is the reason why Camilla won’t shut her trap around Kate. Recent polls show that the British people are finally coming around to the idea that Charles will succeed when his mother passes. It’s not like the people have much of a choice, but public opinion is always best to have on your side and the notion of the ever-popular William taking the reigns over his father has had its proponents. But Kate’s not backing down. The Cambridges may not be next in line but they are the people’s favorite and Kate’s new bump might be giving her the confidence she needs to stand up to Camilla’s Diana jibes.

But it wasn’t just about rivalries and backstabbing. The Queen suffered a collapse during the marathon celebrations. The 86-year-old monarch braved royal duty after duty for her people but it all got too much for her when her constant companion Prince Philip was rushed to the hospital last Monday for a bladder infection. The ailing prince has had a rough year and the Queen must be beginning to realize his time might be near. She showed some rare emotion during the Jubilee concert last week without Philip by her side on the stage and later collapsed from the strain. Naturally, the Queen continued to go about her work without anyone being the wiser.

This could all just be a case of too many family members being together for too long under the strain of an illness and public scrutiny. Family occasions tend to bring out the worst in people and I don’t think the Windsors had the tightest bonds to begin with. Do you think they were just playing nice for the cameras?