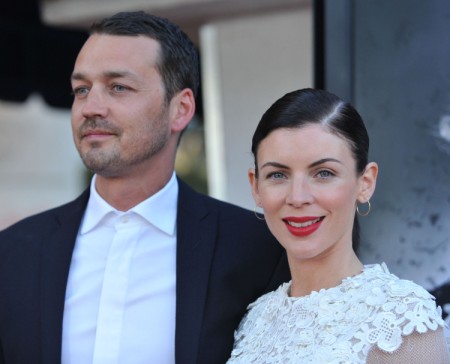 Liberty Ross may be delusional but she’s also very forgiving. She’s a better woman than I because she is giving her philandering husband, Rupert Sanders, a second chance after he was pictured kissing Kristen Stewart’s “entire body” in an abandoned parking lot earlier this month.

The Telegraph reports Liberty actually believes Kristen’s revisionist interpretation of the “momentary indiscretion” and ready to move on. “She is prepared to give Rupert a second chance,” one of her friends tells the newspaper. “She accepts that it was just one of those silly flirtations.”

Actually, I think she accepts the fact that she has two children with this douche and doesn’t want to split up her family. That’s the only conclusion I can come to since just about everyone, including Liberty’s brother, Leopold Ross, has said the affair wasn’t a one-time thing and had been going on for months. And did you see any silly flirting going on in those pics? I sure didn’t. Liberty is either fooling herself or trying to save face – my guess is it’s the latter.

So not only is Rupert getting off easier with the public but he’s also getting off easier in his relationship. Oh, if only Kristen had it so good! Robert Pattinson looks like he’s not in a forgiving mood. A U-Haul was spied outside the home he shared with Kristen over the weekend giving a pretty good indication that both are moving out and essentially away from each other. He’s apparently cut off all conversation with her as well. Hey man, there’s nothing holding him to her. Kristen and Rob don’t have a family, nor do they owe each other anything (sorry Twihards, you don’t count here) so it’s good he’s moving on. Rupert and Liberty’s situation is different. Of course I’d love to see Liberty kick Rupert’s ass out on the curb as well but I can understand why she wouldn’t. It’s the nature of that beast called marriage.

What do you think of Liberty’s decision to keep her family together? Is she downplaying the affair so they can move on or do you think she really believes what happened between Kristen and Rupert was silly? Do you believe Rob will eventually come around as well?