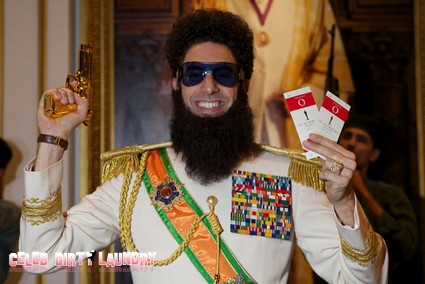 Sacha Baron Cohen has been given the go ahead from the bosses of the Oscars to play the role of The Dictator at Sunday’s Academy Awards. Cohen received permission to be his hilarious character and harass Oscar nominees and presenters as The Dictator on the red carpet.

Reports suggested the zany British comic had been banned from the big night after revealing he planned to arrive in character as his latest comedy creation, but Oscar bosses insisted they simply wanted to know what he had planned before agreeing to let him walk the red carpet.

This sounds like the bosses capitulated after Cohen went public with a very funny response after he learned that The Dictator was not welcome at the event. Cohen previously issued a video message in character promising to punish the “Academy of Motion Picture Arts and Zionists” if Oscars officials did not issue him tickets to the show.

It’s still not clear exactly what Cohen will do, but Oscars producer Brian Grazer appears to be more than happy to let him turn up as the bearded tyrant.  Glazer says: “We’re thrilled to have him and he’ll be on the red carpet dressed as The Dictator.”

Cohen has now posted an online picture of himself in character holding up his Oscars tickets, with the statement, “Victory Is Ours!… The Academy have surrendered and sent over two tickets and a parking pass! Today Oscar, tomorrow Obama!”

Cohen was invited to the Oscars as a castmember of the nominated movie Hugo.

You’ve got appreciate Cohen as one of the last of the truly brave and funny people in showbiz.