Scott Disick Parties And Flirts With Pussycat Dolls: Kourtney Kardashian Left At Home With The Kids 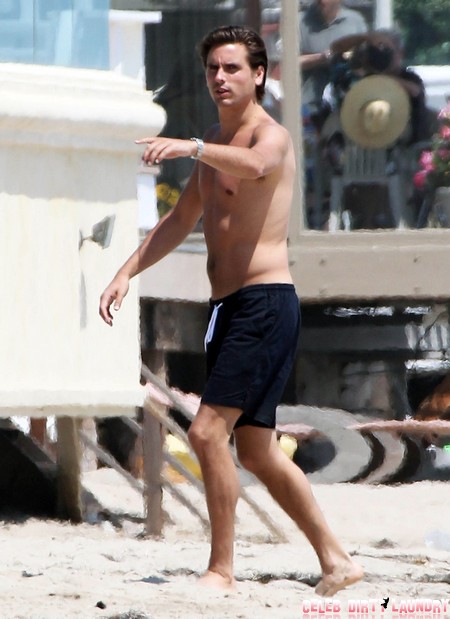 The romance between Scott Disick and Kourtney Kardashian is not one for the history books. The Shakespearean play it best compares to is probably Hamlet, if you subtract Hamlet’s intense personal struggle coming to terms with his mother’s incest and his father’s murder, and add in a few more scenes of him being a bastard to Ophelia.

This season, on Keeping Up with the Kardashians, we’ve watched a very emotional (and sometimes drunk) Scott insist that it hurts his feelings when Kourtney says she doesn’t want to marry him. In fact, viewers who tune in next week will get to see Rob have a sort of intervention with big sister Kourt, when he says that Scott feels like a walking sperm and little else (paraphrased, but the idea is there).

But, really, faithful viewers know Scott. We watched him punch the mirror in Miami, stay out until 6am in NYC, and we’ve heard him tell Kourt that his drinking isn’t something she needs to worry about.

Saturday night Scott , longtime boyfriend of Kourtney and father of her two children, Mason and Penelope, was spotted hosting a Labor Day party in San Diego, where, among others, were the Pussycat Dolls. Kourtney was not seen.

Some divine person approached Scott, who People Magazine reported was drinking Bud Light (surely he can afford something better than piss in a can?) and asked him about his new daughter, Penelope. Scott had the audacity to respond that Mason is “taking on the big brother role well, nothing major has changed.”

I know that parenting is really different in LA, but I think that most couples would agree that the addition of a child is, in itself, a major change. But who can say. Maybe the quote is from a huge monologue about the joys of parenting, his hate of parties, and how much he loves and misses his family.

Scott seems like a nice enough guy. For me, the extreme clubbing and drinking (and domestic abuse, and too-personal sex confessions to Kourt’s family members) would have been a deal breaker. But I totally understand Kourt wanting to stay with the father of her kids. I think it is natural to want to collect family, not separate. But I have to say, based on stories like this, and the way he was portrayed on 7 seasons of KUWTK, I do not blame Kourtney at all for being so hesitant to put a ring on it.

In fact, I think it’s a miracle they are still speaking, let alone dating.

Should Kourtney marry Scott? Is Scott capable of keeping a home stable?  Might he be better suited to keep a stable at home?