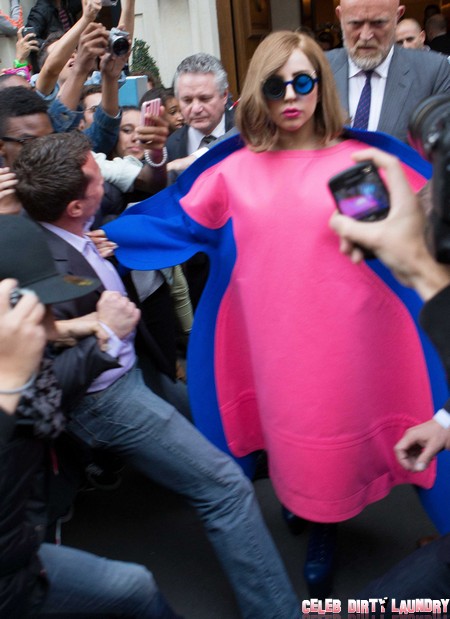 Basically everyone who has been on the internet has seen the self-leaked pictures of a naked Lady Gaga, be it swimming, sitting, or, the most recent addition, sitting on a toilet. The singer tweeted a black and white photo taken by Terry Richardson, which shows her with wavy dark hair, crossing her legs, smoking a cigarette. Her “little monster” fans have responded with awe, most asking how someone can look so sexy while sitting on the john. Whatever you think of the picture, it is obvious that Lady Gaga has gained some weight. We previously reported that Kelly Osborne thinks the singer is pregnant, sighting her baggy clothing and lack of hair bleaching as evidence.

Whether the Gaga is preggers or not, she’s getting desperate to keep up her self esteem. Although she’s always been an advocate for loving who you are (hence the title of her latest album, “Born This Way”) but we think she is probably reaching out to her fans for support while she struggles to maintain her sex-goddess image (LOL!). She recently told her fans, “To all the girls that think you’re ugly because you’re not a size 0, you’re the beautiful one. It’s society who’s ugly.” Which is nice to think, but it’s worth saying that Lady Gaga has had substance abuse issues that she’s previously talked about, which are definitely degrading to her health. Like Kim Kardashian, she’s promoting herself as a “not size 0” body type, but will fans buy it?

The photo also shows a pretty melancholy face, which could be for artistic merit, but I think is more likely a look at the woman underneath the smiling performer. Lady Gaga always strips down for her fans—physically and emotionally—and this could be a response to the rumours about her weight gain. What do you think of her newest picture? Can we call it Lady Gaga toilet humor? Does she look sexy and glam on the pot with her cigarette, or would you prefer her in a meat dress? Do you think she’s put on a few pounds, and, more importantly, could there be a baby monster on the way? Is Lady Gaga pregnant? Until we see her drinking again, I’m putting my money on a pregnancy! Will Baby Gaga be an early summer birth?