Selena Gomez Can Touch Justin Bieber Anywhere She Wants – Except One Place! 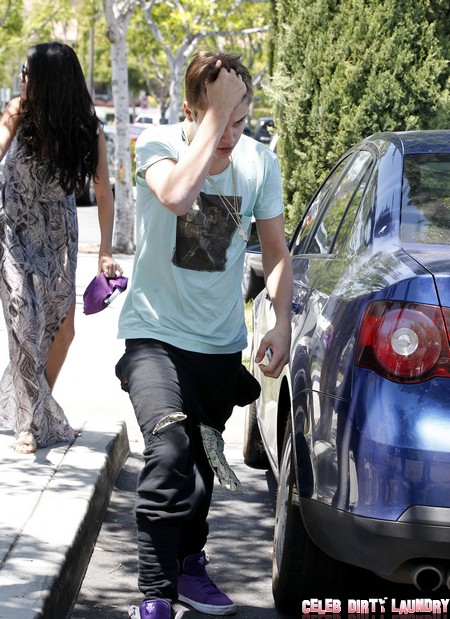 Justin Bieber just released a book, 100% Official Justin Bieber: Just Getting Started. I’m 100% sure it was written by someone else based on taped interviews. In it, Justin talks about his life, love, and hopes for the future. This is no surprise, it’s the standard formula for a celebrity book. Throw in a few private anecdotes and you’ve got a best seller.

Justin and girlfriend, Selena Gomez, are just months away from their two-year anniversary. They’ve lasted through breakup rumors, ambiguous tweets from Justin (which were often deleted minutes after they were posted, but not fast enough to escape our critical eye!), and, most recently, Selena’s confession that she isn’t Christian. I expect this will be the final deal breaker, as Justin has a huge tattoo of “Jesus” on his calf. They’ve had their ups and downs, but it sounds like some things never reach conclusion.

Celebrities try to keep their private lives secret, but in his book, Justin revealed a pretty intimate hard-limit he and Selena have set. He has a body part that only one person can touch. “My dear friend Vanessa—the only person in the world who is allowed near my hair.” That is such a Justin thing to say. Of course, his hair was his moneymaker when he was just starting—remember the classic Justin hair flip? And no girl wants to run their fingers through hair that’s full of styling gel. But it is definitely abnormal in a relationship to have such a harmless body part off limits.

Have you ever seen pictures of Selena touching Justin’s hair? I’m going to search the web for any pictures contradicting his rule, but until then, tell us what you think! What does it say about Justin that he has such weird feelings about his hair?